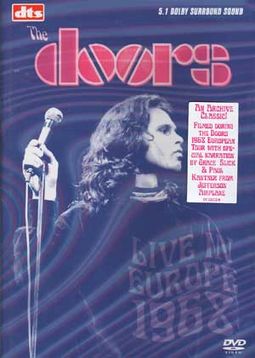 Filmed during their European Tour in 1968, The Doors swept through the cities of London, Stockholm, Frankfurt and Amsterdam. This collection of rare live performances is introduced and narrated by Paul Kantner and Grace Slick, who, as members of Jefferson Airplane, shared the bill on this historic tour. An archive classic.

Though the flame was snuffed out too early, the Doors left an indelible footprint on the history of rock and roll with their blend of poetry, heady-but-heavy music, and high rock theater. Frontman Jim Morrison's live antics--which have become the stuff of legend--can be amply witnessed on this video tracking the Doors' 1968 European tour. Filmed in London, Frankfurt, Stockholm, and Amsterdam, this rare live footage is narrated by Grace Slick and Paul Kantner of the Jefferson Airplane, the Doors' opening band for that tour. Fantastic live performances of the tour de force "When the Music's Over," the antiwar "Unknown Soldier," the revolution-inciting "Five to One," and many others, are accompanied by firsthand anecdotes, making LIVE IN EUROPE an intriguing glimpse into the powerful, mysterious world of this seminal band.

84%off
The Doors
R-Evolution
$6.98 Super Savings
Add to Cart

16%off
The Doors
Collection
$8.40 Super Savings
Add to Cart

The Doors
Soundstage Performance / No One Here Gets Out Alive (2-DVD)
$23.50
Add to Cart

The Doors
No One Here Gets Out Alive: Doors' Tribute To Jim Morrison (DVD)
$12.70
Add to Cart

84%off
The Doors
R-Evolution
$6.98 Super Savings
Add to Cart