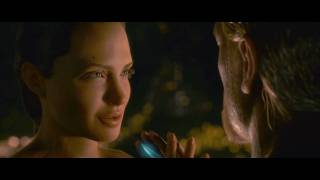 Director Robert Zemeckis mines the epic Old English poem for his latest action adventure to feature performance capture animation. The medieval tale was adapted for the screen by Neil Gaiman and Roger Avery, and no doubt it bears little resemblance to the text you studied in high school. So the story goes, King Hrothgar (Anthony Hopkins) and his people are being terrorized by the horrific monster Grendel (Crispin Glover). Hrothgar puts out a call to any brave man who can come and slay the monster. Enter Beowulf (Ray Winstone) and his brave band of soldiers. Beowulf is a mighty warrior, and he quickly dispatches Grendel, but in doing so he enrages Grendel's mother--played here by an extremely sexy and serpentine Angelina Jolie. Beowulf journeys out to lay waste to Grendel's mother as well, but soon finds his resolve tested by great temptation. His choice ultimately brings about a new curse--one far worse than Grendel--and he must live with regret, until the day finally comes when he is given a chance for redemption.

Zemeckis first utilized performance capture in the magical Christmas story POLAR EXPRESS, but one certainly shouldn't expect any dancing elves in BEOWULF. The film features enough gore and bloodshed to rival a teen slasher film, and in the 3D versions, the viewer is sometimes given the perspective of blood actually raining down upon them. However, if one can stomach the ooze and innards, the 3D effects are truly something to behold, as spears and dragons seem to soar mere inches from your face. No doubt poetry purists will have much to haggle with in this violent, sexed-up version of the tale, but teenage boys everywhere are likely to queue up multiple times--if not to see Grendel, then to eyeball his mother.

The Crucible
$10
Add to Cart

Conan the Barbarian
$10
Add to Cart