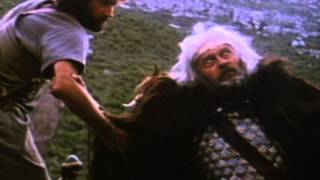 An adaptation of the legendary biblical tale, director Bruce Beresford's film stars Richard Gere as King David, favorite of the God of Israel. Although only a shepherd boy, David is anointed as heir to the throne of Israel by Samuel (Dennis Quilley), who is disgusted with the weakness of Saul (Edward Woodward). When David brings the protracted war with the Philistines to an end by defeating their champion Goliath (George Eastman) in battle, he is celebrated by his people but must flee the country to avoid being killed by Saul, whose jealousy he has aroused. When Saul and his sons finally die in battle, David assumes the throne--but not without a sense that it is covered in blood. As time passes, he finds himself in vicious battles with neighboring tribes to ensure the survival of the Israelites. Despite David's many achievements, the exercise of power has a corrupting influence on the patriarch, and ultimately, even he is no longer favored by his God. Donald McAlpine's photography is superb, as is Beresford's direction.

In KING DAVID, Richard Gere plays the religious title role of David, the shepherd boy who slew Goliath and later ascended to the throne of Israel.

17%off
The Ten Commandments
$12.50 Super Savings
Add to Cart