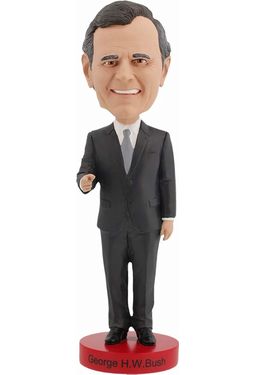 George Herbert Walker Bush was the 41st President of the United States serving from 1989 ? 1993. Prior to becoming President, he was the 43rd Vice President of the United States for two terms under President Ronald Reagan. Coming from a family with a tradition of public service, Bush felt the responsibility to make his contribution both in time of war and in peace. Bush took office just as the cold war was ending. The communist empire had broken up, and the Berlin Wall had fallen. When the Soviet Union ceased to exist, Bush was able to draw on his considerable foreign policy experience and his gift for personal diplomacy, to forge a relationship with Soviet President Mikhail Gorbachev that made the end of the cold war more smooth and peaceful than almost anyone thought possible. It comes in a colorful collector box.