Gunfight at the O.K. Corral

The Wildest Gunfight in the History of the West !

Different formats available:
Gunfight at the O.K. Corral (Blu-ray) for $14.50
Our customers love us! 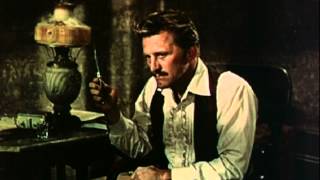 Gunfight at the O.K. Corral - Trailer

Of all the film versions of the famed 1881 gunfight, this one, starring Burt Lancaster as Wyatt Earp and Kirk Douglas as Doc Holliday, probably has the highest testosterone quotient. Focusing on the friendship between the forthright, responsible sheriff and the risk-taking, consumptive gambler, it suggests that their relationship is based on this opposition of qualities. Wyatt's stormy romance with gambler Laura Benbow (Rhonda Fleming) and Doc's rivalry with Johnny Ringo (John Ireland) over the affections of local madam Kate Fisher (Jo Van Fleet) add to the tension preceding the final showdown. When Wyatt's brothers, Tombstone lawmen, ask for his help in evening the odds against Ike Clanton (Lyle Bettger), his brothers, the McLowerys, and Johnny Ringo, Doc decides to join his friend. After Wyatt gets to town, he quickly puts a crimp in Ike's cattle-rustling activities, which leads the outlaw to set him up for assassination. A mix-up leads to Wyatt's youngest brother, Jimmy (Martin Milner), getting killed in Wyatt's place. Doc tries to talk him out of revenge, but the enraged lawman will have none of it, and the scene is set for the historic final gun battle. This solid, well-made Western is hoisted by the fine screenplay by novelist Leon Uris and the charisma of the two stars, as well as an outstanding suporting cast, including Dennis Hopper, Jack Elam, Lee Van Cleef, Earl Holliman, and Kenneth Tobey.

This straightforward account of the events leading up to the famous Tombstone gunfight focuses on lawman Wyatt Earp and ailing Doc Holliday as they battle the Clanton gang. The story has been oft-told but not with this distinction or with the two-fisted combination of KIrk Douglas and Burt Lancaster.

My Darling Clementine
$28
Add to Cart

Customer Rating:
Based on 13841 ratings.


I enjoyed the film. Clear dvd.