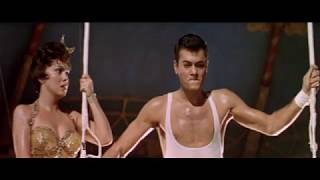 This splashy Hollywood spectacular was a radical departure for a director who had specialized in socially conscious thrillers. Set against a circus backdrop, it stars Burt Lancaster as Mike Ribble, a crippled former acrobat. Tino Orsino (Tony Curtis), a young aerialist, seeks out the older man, hoping to learn the triple somersault, an extremely dangerous routine that had maimed Ribble. When Lola (Gina Lollabrigida), an attractive tumbler, becomes involved with both men, the fireworks begin.

A decided change of pace for Carol Reed, TRAPEZE focuses on a trio of circus performers played by Burt Lancaster (Mike Ribble), Tony Curtis (Tino Orsini), and Lola (Gina Lollabrigida). Orsini, a young aerialist, has joined the circus Ribble works for, hoping to learn the secret of the triple somersault, an extremely dangerous stunt that had crippled the older man years earlier. The brooding Ribble feigns indifference but begins to contemplate helping Orsini. At the same time, Lola, a tumbler, wants to break into the act, and comes on to Orsini, believing that this will help her chances. As the three work together, she begins to fall in love with Ribble, and the resulting triangle makes for a lively workplace. Despite the obvious tension, Ribble and Orsini develop a kind of father-son relationship. As the older man teaches the younger, he starts to enjoy the idea that his protégé will succeed. Inevitably, tensions between the two erupt, and Bouglione (Thomas Gomez), the circus owner, threatens to look for a catcher to replace Ribble. Who will be aloft with Orsini when he attempts the treacherous triple without a net' TRAPEZE, directed with aplomb by Carol Reed (ODD MAN OUT, THE THIRD MAN), is an entertaining eyeful featuring spectacular stuntwork from some of Europe's top aerialists.

The Greatest Show on Earth
$9.10
Add to Cart