I don't feel I have to wipe everybody out, Tom. Just my enemies. 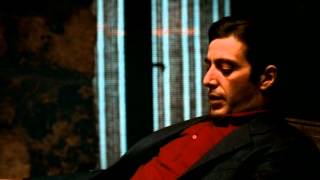 "Keep your friends close, but your enemies closer."

The sequel to THE GODFATHER tells the story of both a young Vito Corleone (Robert De Niro), newly arrived in America, and his son Michael (Al Pacino) 40 years later, running the family empire. On the streets of Hell's Kitchen in 1917 New York City, Vito is initiated into the ways of the local Cosa Nostra by his friend Clemenza (Bruno Kirby). After killing the local mafioso in a towel-wrapped gun, Vito becomes the new man to be respected and feared. Meanwhile, a dour Michael Corleone negotiates with business partner Hyman Roth (legendary Method-acting teacher Lee Strasberg in his first film role) in Cuba and testifies in front of a Washington Senate committee. Robert Duvall (Tom Hagen), Diane Keaton (Kay Corleone), Talia Shire (Connie Corleone), and John Cazale (Fredo Corleone), reprising their roles from THE GODFATHER, are outstanding as the people forced to watch the new godfather's moral destruction. De Niro, speaking in Italian, captures the mannerisms of Marlon Brando's Vito Corleone from the first film brilliantly. THE GODFATHER PART II is one of the only major sequels ever made that might just surpass the original.

Francis Ford Coppola's compelling sequel lives up to--and even eclipses--the brilliance of THE GODFATHER, contrasting the life of Corleone father and son. In parallel story lines the movie traces the problems of a matured Michael Corleone (Al Pacino) in 1958 and that of young immigrant Vito Corleone (Robert De Niro) in 1917's Hell's Kitchen. Vito is introduced to a life of crime by two-bit hood Clemenza (Bruno Kirby) while Michael survives an attempt on his life, familial betrayals, and Senate hearings...but at a cost. De Niro, speaking almost completely in Italian, is charismatic as the young Don, a Robin Hood-type figure.

Once Upon a Time in America (Extended Director's Cut)...
$8.40 Super Savings
Add to Cart

32%off
The Godfather - Fleece Blanket
$13.58 Super Savings
Add to Cart