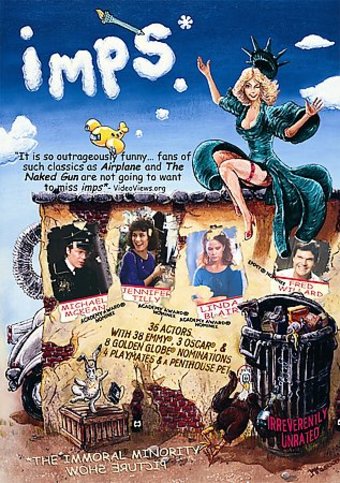 With Linda Blair, Julia Duffy, and Michael McKean among the vast, star-studded cast, this comedic bonanza (IMPS* stands for THE IMMORAL MINORITY PICTURE SHOW) features spoofs such as northern Indiana's pencil sharp-off championship, a music video from the Marquessa de Sade, and the dumbest horror heroine of all time.

Once Upon a Time in a mythical place called Hollywood, a long, long, long time ago in a galaxy not so very far away, a witty group of actors with 38 EMMY Nominations, 3 Academy Award nominations, and 8 Golden Globe nominations (along with 4 Playmates and a Penthouse Pet) came together in a burst of comic frenzy and created "imps*". Now, decades in the making, re-edited, re-digitized, re-polished and
(ir)re-verently unrated, available for the very first time.
Nowhere else can you see the Northern Indiana pencil sharp-off championship, Coming Attractions for "Teenage French Stewardess Nurse… Babysitter", an exclusive sneak peek at the agonizing new music video by the Marquessa de Sade, and yes, she's back, the dumbest heroine in Horror film history. Note: No harm was done to the careers of these actors in the filming of this motion picture.

O Brother, Where Art Thou?
$5.80 Super Savings
Add to Cart