Images of Wax That Throbbed with Human Passion!.....Almost Woman! What Did They Lack? 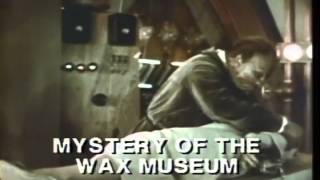 Mystery Of The Wax Museum Trailer 1933

When a fire breaks out in a London wax museum, Ivan Igor (Lionel Atwill), the museum's sculptor, becomes horribly disfigured and loses his hands--and all his wax dummies--to the flames. He relocates to New York and begins to populate a new wax museum with disturbingly lifelike creations. Florence Dempsey (Glenda Farrell), a wisecracking reporter hoping to break the case of several possibly related but inexplicable murders, follows the trail of carnage to Igor's museum. As Florence gathers clues, Igor begins to show an ominously intense artistic interest in Florence's roommate, the lovely Charlotte Duncan (Fay Wray).

Director Michael Curtiz (CAPTAIN BLOOD) energizes THE MYSTERY OF THE WAX MUSEUM with thrilling, shadowy chases, an unusual comic subplot, and a sadistic, edgy tone. Filmed in two-toned Technicolor, the film is stunning to look at. The story was remade in 1953 as a 3-D Vincent Price vehicle entitled HOUSE OF WAX.