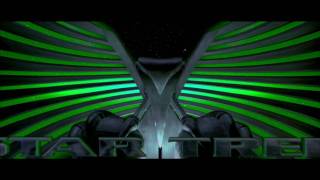 In STAR TREK: NEMESIS, based on the STAR TREK: THE NEXT GENERATION television series, the USS Enterprise is gearing up for a challenging mission. While responding to a call from the Romulan neutral zone, the crew comes across a signal on the nearby planet Remus. It turns out to be Data's (Brent Spiner) less advanced brother, B-4 (also played by Spiner). Soon thereafter, Picard is confronted by Shinzon (Tom Hardy), who makes an offer of peace on behalf of the Romulans. As Starfleet enters into negotiations, they realize this treaty may have a twist. Shinzon presents himself as a clone of Captain Jean-Luc Picard (Patrick Stewart), and as a simultaneous friend and foe. Though the baby faced Shinzon wears an intimidating shiny black metallic suit of armor, and spits his words through a nasty sneer, he is clearly no match for Picard. Meanwhile Data has a nifty side project debugging his clone, whose intentions are not as innocent as they may seem. As tension mounts between the crew of the Starship Enterprise and Shinzon's Reman minions, resulting in riveting high-tech deep-space battle, a vital sacrifice must be made to save the day. STAR TREK: NEMESIS's shocking ending will leave viewers hanging, anxiously awaiting the next installment in the series.