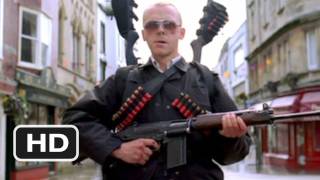 Pop culture sponges Edgar Wright, Simon Pegg, and Nick Frost team up again for HOT FUZZ, their follow-up to the surprise hit movie SHAUN OF THE DEAD. HOT FUZZ follows a near-identical formula to its predecessor, simply replacing the various homages to horror movies by heaping on the adulation for action flicks such as POINT BREAK and BAD BOYS II (both of which are referenced throughout). The plot finds outstanding London-based police officer Nicholas Angel (Pegg) transplanted to a rural English village. On arrival, Angel teams up with the oaf-like PC Danny Butterman (Frost) and together they investigate a series of mysterious murders, all of which are classed as "accidents" by the increasingly strange townsfolk.

Director Wright combines gory set-pieces with traditional action-movie staples: mustachioed detectives in sunglasses, corny one-liners, rapid machine-gun fire, and blood-spattered fight scenes all feature heavily. References to other movies come thick and fast throughout, and HOT FUZZ will have film fans' memories working overtime as they try to catch all the allusions to Pegg/Wright/Frost's favorite films. A veritable Who's Who of British comedy provides support, with Martin Freeman (THE OFFICE), Bill Bailey (BLACK BOOKS), Steve Coogan (I'M ALAN PARTRIDGE), and Olivia Colman (PEEP SHOW) in small roles, and there's even space in the cast for serious actors like Timothy Dalton and Paddy Considine. HOT FUZZ eases up on the humor of SHAUN OF THE DEAD and often threatens to topple over into Chuck Norris territory, but Wright manages to insert enough gags to keep the balance just about perfect, providing a fitting, amusing, and occasionally touching homage to cinema's action heroes.

The Other Guys (Unrated)
$6.50 Super Savings
Add to Cart

The Other Guys
$6.50 Super Savings
Add to Cart