It begins on the street. It ends here. 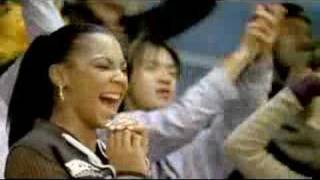 In the tradition of LEAN ON ME and DANGEROUS MINDS comes COACH CARTER, an inspirational drama starring Samuel L. Jackson. Jackson portrays real-life figure Ken Carter, who graduated from California's Richmond High only to return there years later, in 1999, and take over as head coach of the boys' basketball team. Unfortunately, the troubled school he remembered as a teenager is an even more insufferable place in his adulthood. Determined to make a change in his players' lives, Carter makes each young man sign a contract that ensures he will maintain a 2.3 GPA, attend every class, and wear a jacket and tie on game day. Of course, the players reject the contract at first, but when they realize that they don't have any other choice, they give in. And when it appears that their tough-as-nails coach is actually turning them into winners on the court, they embrace their coach's philosophy even further. But when Coach Carter receives the incomprehensibly awful progress reports of his players, he does the unthinkable: he benches the entire team. Directed by Thomas Carter (SAVE THE LAST DANCE), COACH CARTER is a sensitive drama that features an impassioned performance by Jackson, as well as the impressive young cast (most notably Rob Brown, Rick Gonzalez, and Robert Ri'Chard).