Stake Your Claim To The Musical Goldmine of '69! 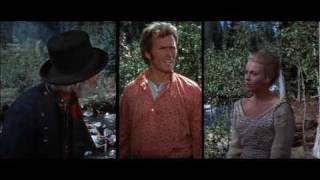 "You are hereby granted exclusive title to Mrs. Elizabeth Woodley, and to all her mineral resources."
- Parson (Alan Dreeben Dexter) to Ben Rumson (Lee Marvin) at marriage ceremony

Clint Eastwood and Lee Marvin break out of their traditional screen personas in this offbeat western musical comedy with a memorable Lerner and Loewe score. Pardner (Eastwood) and Ben Rumson (Marvin) are two buddies who share everything, including their wife Elizabeth (Jean Seberg), whom they bought at an auction. Together, between bouts of drinking and gambling, the two men are able to transform such activities as hijacking a stage and kidnapping prostitutes into steps toward transforming their mining camp into a boomtown. Directed by Josh Logan (PICNIC, SOUTH PACIFIC). Academy Award Nominations: Best Score of a Musical Picture.

Set in No Name City, California during the gold rush, this musical comedy concerns prospectors Ben and Pardner and their unusual nuclear family. The business partners strike a deal to share Ben's wife Elizabeth, whom Ben purchased from a Mormon. But the free-thinking Ben is worried about rivalry over Elizabeth from the town's all-male population, hungry for female company. So he arranges to kidnap a stagecoach full of working girls on their way to a nearby city, and sets up a brothel in No Name. That puts the place on the map and business booms, but competition for gold also grows.
Later, needing cash to survive the winter, Ben and an accomplice, Mad Jack Duncan, tunnel under the town's buildings to catch loose golddust falling from the floorboards. But No Name collapses under the strain, and everyone moves on, except for Pardner and Elizabeth.

19%off
Support Your Local Sheriff
$16.20 Super Savings
Add to Cart