Life is a terrible thing to sleep through. 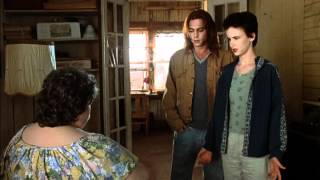 "Good night to you but not to me."
- Arnie Grape (Leonardo DiCaprio)

Bizarre, whimsical, and touching scenes mark WHAT'S EATING GILBERT GRAPE. Johnny Depp is Gilbert, the eldest brother in a large family of a very large (morbidly obese, actually) mother (Darlene Cates) who hasn't left the house since her husband committed suicide years before. Leonardo DiCaprio, who received an Academy Award nomination for his role, is Arnie, Gilbert's retarded teenage brother who needs constant supervision (he's often found scaling the town water tower). Caring, passive Gilbert is burdened beyond reason, living a dead-end life in a dying small town, stocking shelves at a grocery store whose business being taken over by the new mall supermarket. Gilbert's best friends (Crispin Glover and John C. Reilly) see their futures in the form of undertaker and Burger Barn owner, and Gilbert's other social life is taken up with a random affair with a frustrated and reckless housewife (Mary Steenburgen). Everyone needs the constantly patient Gilbert, whose future seems equally grim until well-traveled, straightforward Becky (Juliette Lewis) and her nonconformist grandmother (Penelope Branning) come to town. Their camper is in need of repair, so Becky stays long enough to actually have an effect on Gilbert, making his new life spiral in wild ways. Based on the novel by Peter Hedges (who also wrote the screenplay), WHAT'S EATING GILBERT GRAPE is quirky, irresistible, and endearingly eccentric without being a freak show.

Lasse Hallstrom directs this beautifully photographed, critically acclaimed drama about small-town life and the contraints a young man's family's responsibilities put on his independence. Gilbert Grape (Johnny Depp), the de facto head of the Grape family following the suicide of his father, struggles to take care of his two sisters, his mentally handicapped brother (Leonardo DiCaprio), and his 500-pound mother, when a beautiful young free spirit (Juliette Lewis) awakens him to the fact that he is not living his own life. The screenplay is written by Peter Hedges who also wrote the novel of the same name.