He's the highest paid lover in Beverly Hills. He leaves women feeling more alive than they've ever felt before. Except one. 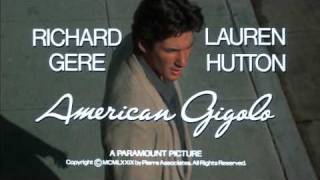 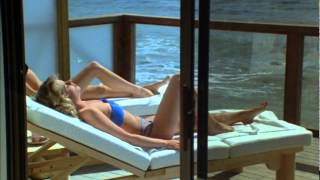 "My God, it's taken me so long to come to you."
- Julian (Richard Gere) to Michelle (Lauren Hutton)

Richard Gere is Julian Kay, a slick emotionally and spiritually deprived L.A. hustler in AMERICAN GIGOLO. While servicing an upscale clientele in the Hollywood area, he becomes involved with a rich senator's wife (Lauren Hutton), their relationship extending beyond Julian's normal encounters. Little does he know he is about to be framed for murder, forcing him to rely on alibis from Madame Anne (Nina Van Pallandt), a crooked pimp (Bill Duke), or the senator's wife herself. A stylishly sleazy look at moral decay and redemption, director Paul Schrader combines a European cinematic sensibility with his usual themes of moral drift and emotional alienation in this vivid portrait of early 1980s chic Hollywood decadence.

An escort for hire becomes framed for murder and needs his secret lover, wife of a noted politician, to provide his alibi.