Children of a Lesser God R

Love has a language all of its own. 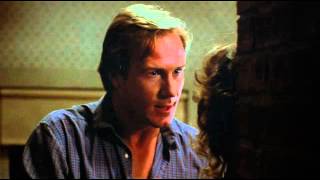 Children of a Lesser God - Trailer

James Leeds (William Hurt), a handsome and dedicated teacher, just started his new assignment at an elite school for the deaf. Immediately, James begins using unconventional teaching methods to reach his students. Sure enough, he manages to inspire the most introverted pupils to participate in class. But there's one person James hasn't been able to reach: the deaf custodian, Sarah Norman (Marlee Matlin). Sarah, also an alumni of the school, has chosen to remain in the safe ecosystem of the hearing impaired. James, aroused by her beauty but put off by her cynical, cold manner, vows to know her more closely and tries to reach the sensitive woman hiding behind the tough exterior.

Based on Mark Medoff's Tony Award-winning play, CHILDREN OF A LESSER GOD is a refreshing and original film. Matlin is both endearing and sensuous as the bitter Sarah. One feels warm and fuzzy inside as Leeds (Hurt) tries to coax the begrudging Sarah out of her shell. The directorial debut for T.V. veteran (HILL STREET BLUES, FAMILY) Randa Haines, CHILDREN OF A LESSER GOD is a key film from the 1980s, it landmarks the growth of women directors in the industry and remains an inspiration for a generation of diverse filmmakers to come.

38%off
The Accidental Tourist
$11.13 BLACK FRIDAY
Add to Cart

Sound and Fury
$19
Add to Cart