Now...from the star, the director and the producer of 'Gunfight at the O.K. Corral' 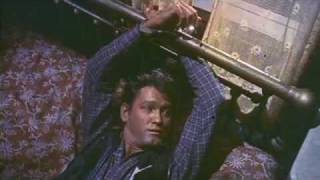 Kirk Douglas stars as U.S. Marshal Matt Morgan. When Morgan's wife is raped and murdered because she's a half-breed, the killers leave behind a saddle that he recognizes as the property of his friend Craig Belden (Anthony Quinn), a wealthy cattle rancher in the nearby town of Gun Hill. Realizing that Belden's son Rick (Earl Holliman) is one of the killers, Morgan travels to Gun Hill to arrest him. Although sympathetic about the death of Morgan's wife, Belden predictably refuses to turn over his son when the marshal makes known the purpose of his visit, claiming that Morgan owes him for having once saved his life. Not only must Morgan locate and arrest Rick, but he has to do so before the last train leaves Gun Hill at 9 p.m. Although the whole town, which is virtually owned by Belden, seems to be against him, the marshal receives some much-needed help from Linda (Carolyn Jones), the sharp local madam. The entire cast is excellent and John Sturges's direction is exemplary in this solid if unsurprising genre exercise.

LAST TRAIN FROM GUN HILL is a well-made Western about a U.S. marshal who traces a killer to Gun Hill only to discover he is the son of a good friend.

Gunfight at the O.K. Corral
$11.10 Super Savings
Add to Cart