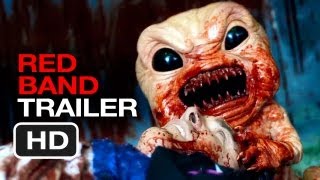 An overworked executive befriends the pint-size demon that lives in his colon in hopes of preventing it from attacking his loved ones at will in this gruesomely fun creature feature from executive producers Jay and Mark Duplass. Duncan (Ken Marino) is already under pressure from his mother (Mary Kay Place) and wife (Gillian Jacobs) to start a family when his bullying boss starts to make life at the office a living hell. His gastrointestinal issues becoming too painful to ignore, Duncan visits a hypnotherapist (Peter Stormare), who quickly reveals the cause of his growing discomfort -- a diminutive demon that feeds on anxiety has moved into Duncan's bowels. Now every time Duncan gets stressed, the creature embarks on a bloody rampage. The more it comes out to play, however, the more difficult it becomes to control, prompting worries that it may soon attack his well-intending yet overbearing family. In order to prevent such a disaster, Duncan takes his therapist's advice and befriends the demon, even going to far as to give it a name -- Milo. The more time Duncan spends bonding with Milo, however, the more difficult it becomes to determine exactly where the creature will focus its wrath next. Stephen Root co-stars in a film from writer/director Jacob Vaughan.