Boon is a reiver (that's a cheat, a liar, a brawler and womaniser) and he had just four days to teach young Lucius the facts of life (like cheating, lying, brawling and womanizing). 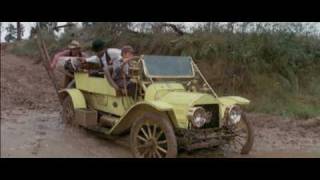 It's a grand and spectacular "horseless carriage" - a shiny yellow 1950 Winton Flyer automobile. Its owner is Mississippi plantation owner "Boss" (Will Geer), who has left it sitting unattended. But hired hand Boon Hogganbeck (Steve McQueen) decides it would be the ideal vehicle to take him and his buddy, stable hand Ned McCaslin (Oscar nominee Rupert Crosse), on a glorious, whirlwind jaunt to distant Memphis. And along for the ride is Boss' earnest 12-year-old grandson, Lucius (Mitch Vogel), who finds himself reluctantly drafted to be the third "reiver" (an old Scottish word for "thief") aboard his grandfather's car. So starts a bumpy journey that sweeps the trio into encounters with both Boon's raucous gal pal (Sharon Farrell) at a brothel and a corrupt racist sheriff, as well as a spellbinding, winner-takes-all horse race - with ownership of the Winton Flyer at stake! Based on William Faulkner's esteemed novel, The Reivers is an irresistible slice-of-life adventure directed by Mark Rydell (The Rose, On Golden Pond) and featuring John Williams' Oscar-nominated musical score.

Based on William Faulkner's novel, THE REIVERS is a coming-of-age story laced with adventure and comedy. Young Lucius McCaslin (Mitch Vogel) leaves home and sets off on a journey with Boon (Steve McQueen), the family handyman, who is a reiver (cheating philanderer); and his best friend, Ned (Rupert Crosse). The three set off for the big city, where the boy, inspired by Boon, learns some valuable lessons about the world. A delightful piece of southern Americana, director Mark Rydell's THE REIVERS is witty and filled with lively action. The score by John Williams and the superb cinematography enhance the richly fleshed-out characters. McQueen, in particular, gives one of the most memorable--and often underrated--performances of his career.

THE REIVERS is an adventurous tale of a young boy who leaves home and sets off on a journey with two devil-may-care older friends. This delightful piece of Americana is based on William Faulkner's prize-winning novel and directed by Mark Rydell.