My Little Pony The Movie PG

Discover A Different Breed Of Hero 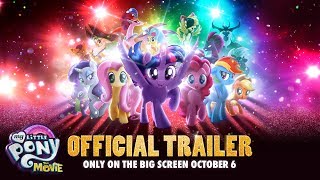 In this feature-film spin-off of the beloved animated TV series MY LITTLE PONY: FRIENDSHIP IS MAGIC, Twilight Sparkle and the rest of the Mane 6 must go on an epic journey to defend their homeland of Equestria from fearsome invaders. Along the way, the ponies make a number of new friends, including a pirate crew. Emily Blunt, Kristin Chenoweth, Liev Schreiber, Michael Peña, Sia, Taye Diggs, Uzo Aduba, Zoe Saldana, Tara Strong, Andrea Libman, and Ashleigh Ball all lend their voices to this fantasy adventure. Directed by Jayson Thiessen.

My Little Pony: Friendship Is Magic - Adventures in the...
$6.20 Super Savings
Add to Cart

My Little Pony
Escape from Catrina and Other Adventures
$12.10 Super Savings
Add to Cart

25%off
Ub Iwerks: The ComiColor Cartoon Collection
$5.95 on Sale
Add to Cart

25%off
Max Fleischer's Hunky & Spunky: The Complete Collection
$5.95 on Sale
Add to Cart