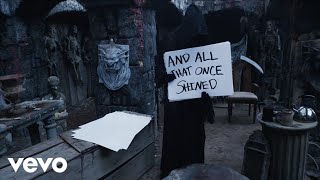 Black Label Society - All That Once Shined (Music Video) 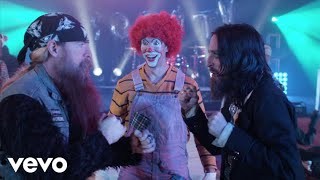 Audio Mixers: Adam Klumpp; John "JD" DeServio; Zakk Wylde.
Recording information: The Black Vatican, Los Angeles, California.
Photographer: Justin Reich.
The Zakk Wylde-led, heavy riffage machine's tenth full-length, and the follow-up to 2014's well-received Catacombs of the Black Vatican, Grimmest Hits is not the cherry-picked best-of that its winking title would suggest. Instead, Wylde and company have crafted another chugging set of Sabbath and Zeppelin-inspired originals that are executed with extreme prejudice. Opener "Trampled Down Below" sneaks in on a wave of bass-anchored sonic mysticism before dropping its payload via a full-court press that sees all four members locking in for a seismic doom blues jamboree with a little post-grunge posturing tossed in for good measure -- vocally, Wylde is often a dead ringer for late Alice in Chains frontman Layne Staley. It's a formula that's applied liberally throughout, but as far as straight-up, in-your-face guitar rock goes, it's hard to argue with the quality of the results, especially on neck-snapping standouts like "Seasons of Falter" and "Room of Nightmares." The classic rock underpinnings that are so prevalent in the heavier tracks also find their way into less decibel-crushing numbers like "The Day That Heaven Had Gone Away," "The Only Words," and "Nothing Left to Say," the latter two of which echo the soulful Southern rock of the Marshall Tucker and Allman Brothers bands. ~ James Christopher Monger

Corrosion of Conformity
No Cross No Crown
$14.50 CD Sale
Add to Cart