U2 Classic Albums: The Joshua Tree 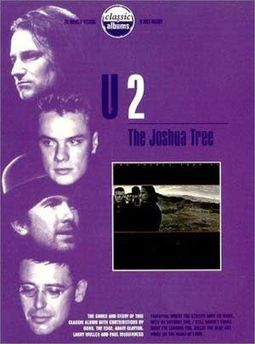 After toiling for years as an underground cult favorite with a rabidly devoted fan base, Irish rock band U2 finally broke through to mainstream success on the strength of their 1987 opus THE JOSHUA TREE. Released in March of that year, THE JOSHUA TREE became U2's first number-one album and won a Grammy Award for Album of the Year. The record's crossover appeal stems from its emotional exploration of universal topics such as love ("With or Without You"), death ("One Tree Hill"), and spiritual longing ("I Still Haven't Found What I'm Looking For") without sacrificing any of the trademark social consciousness of the band's earlier albums ("Bullet the Blue Sky," "Mothers of the Disappeared"). This episode of the CLASSIC ALBUMS series details the making of U2's chart-topping album through interviews with band members, archival film footage, and live performances.

Packed with reminiscences and powerful performances, this is the story of one of the most famous and best records of the '80s. Released in 1987, U2's "The Joshua Tree" topped the Billboard album chart for nine weeks, spending 58 weeks in the Top 40 and earning a Grammy Award for Album of the Year. "The Joshua Tree" gave birth to several major hit singles, including "With or Without You" and "I Still Haven't Found What I'm Looking For," both of which reached Number 1 on the Billboard Top 100. The story of the making of "The Joshua Tree" is told here via interviews and archival film footage, with contributions from band members Bono, The Edge, Adam Clayton and Larry Mullen. U2's long-time manager Paul McGuinness reveals how this powerhouse album catapulted the band into the category of rock superstars.

50%off
Queen
Classic Albums: Making of A Night at the Opera
$3.98 Super Savings
Add to Cart

The Who
Classic Albums - Who's Next
$7.40 Super Savings
Add to Cart

Pink Floyd
Classic Albums: The Dark Side of the Moon
$6.99 on Sale
Add to Cart

67%off
Pink Floyd
Classic Albums: The Making of The Dark Side of the Moon (DVD)
$3.98 Super Savings
Add to Cart

73%off
British Rock Symphony
A Musical Tribute to The Rolling Stones, The Beatles, The... (DVD)
$3.98 Super Savings
Add to Cart