Cheaper By the Dozen 2 PG 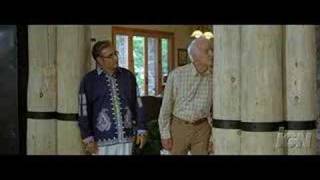 Cheaper by the Dozen 2 trailer (www.slovakforum.info)

Steve Martin returns as the proud patriarch of the Baker family in this sequel to the original CHEAPER BY THE DOZEN, based on a book by Frank B. Gilbreth Jr. and Ernestine Gilbreth. This time, all twelve Baker kids and their parents, Tom (Martin) and Kate (Bonnie Hunt), are going on vacation, returning to their summer cabin in Wisconsin for one last hurrah before the kids grow up and go their separate ways. Lorraine (Hilary Duff) is on her way to New York to begin an internship with VOGUE, Nora (Piper Perabo) is hugely pregnant, and the Bakers want to spend some quality time all together for a change. As the family arrives at their old house, however, they realize that some things have changed--and some things never do. Tom's old high school rival, Jimmy Murtaugh (Eugene Levy) is now the big man about town, owning much of the surrounding area, and raising his large family in a huge home across the lake from the Bakers'. The longstanding competition between the two families--or at least that of the fathers--mounts over the course of their vacation, as the two men resort to ever nastier tactics of one-upsmanship. Meanwhile, Charlie Baker (Tom Welling) becomes closer with Anne Murtaugh (Jamie King), and Sarah (Alyson Stoner) embarks on her first romance with Eliot Murtaugh (Taylor Lautner). It all comes to a head when the two families face off in a canoeing race, during which they are faced with a decision between loyalty to family and friends, and the competitive edge.