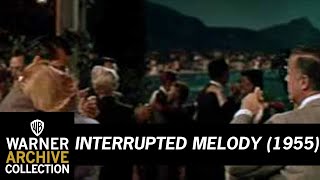 No pretensions. No tantrums. Marjorie Lawrence is a prima donna in the most professional sense of the term. She's a foremost Wagnerian, a soprano equal to the vocal and physical demands of the composer's oeuvre. And she's a beacon of triumph to anyone who fights back when personal tragedy strikes.

The acclaimed tale of Lawrence's rise from outback girl to renowned diva and her subsequent battle against polio won the 1955 Academy Award® for Story and Screenplay. Best Actress Oscar® nominee Eleanor Parker portrays Lawrence, with the film's selection of glorious arias voiced by uncredited opera-legend-in-the-making Eileen Farrell. Glenn Ford and Roger Moore join Parker in a Melody to remember.

Musical based on the real-life story of opera star Marjorie Lawrence and her struggle to overcome polio. Academy Award Nominations: 3, including Best Actress--Eleanor Parker.

"Interrupted Melody" tells the tragic and inspiring life story of opera singer Marjorie Lawrence.
After the budding performer won contests in her native Australia, Marjorie went on to Europe and the U.S., where she reached the top of her field. Lawrence capped off her success by entering into a happy marriage with a doctor, and arranging her career so they could stay together. Then, suddenly, she fell victim to polio.
Her devoted husband refused to give up without a fight, and together the couple succeeded in nursing her back to health -- and putting Marjorie Lawrence on the stage once again.