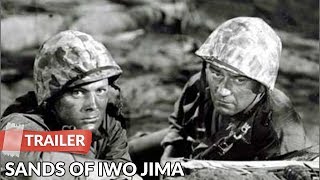 The legendary gung-ho WWII combat film, stars John Wayne as the battle-hardened Sgt. Stryker, a role that would, perhaps more than any other, come to define the actor's iconography. As he begins to hammer an ethnically diverse group of recruits into combat-ready shape, they learn of his notorious toughness, and of the mystery surrounding his demotion. Stryker finds that Pete Conway (John Agar) the son of his late commanding officer, hated his father and hates Stryker for his likeness to the man. After Stryker and his unit have been fighting on Tarawa Atoll, Cpl. Al Thomas (Forrest Tucker) neglects his post, resulting in the death of one man and the wounding of another. While the squad listens to the moans of Bass (James Brown) the wounded man, Stryker, following orders to entrench, refuses to let anyone help him. Bass is rescued, and when he sees Stryker in Hawaii, tells him about Thomas' screw-up. Stryker and Thomas get into a fight which is stopped by a major, but Thomas accepts the blame, knowing Stryker's career could be destroyed, and begs his forgiveness for his dereliction of duty. The unit is ready to move on to its toughest challenge: Iwo Jima. Like nearly all films made during the period, it's hardly a paradigm of realism, but within its limits it remains a very well-made film, certainly one of Dwan's best. Wayne is perfect in the role which earned him his first Academy Award nomination and took his career to a new level.