I've heard all about you, Johnny Eager . . . but I still want you to kiss me! 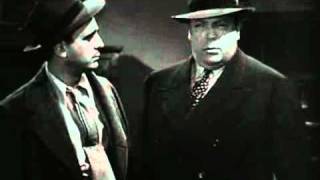 "You don't want me to take you home, and you know it."
- Johnny Eager (Robert Taylor) to Lisbeth Bard (Lana Turner)
"There's a limit to this sociology business."
- Judy (Diana Lewis) warning Lisbeth to keep away from Johnny

Lana Turner ("Peyton Place," "The Postman Always Rings Twice") stars as the daughter of a prominent D.A. who is manipulated by gangster Robert Taylor ("Ivanhoe," "All the Brothers Were Valiant") when she falls head over heels for him. Van Heflin ("Shane," "The Three Musketeers") received an Academy Award as Taylor's alcoholic confident. With Edward Arnold ("Mr. Smith Goes to Washington"), Robert Sterling ("Show Boat"), Emmy-winner Glenda Farrell ("Kissin' Cousins"), and Barry Nelson ("The Shining"). Directed by Oscar-winner director/producer Mervyn LeRoy ("The Wizard of Oz," "Little Caesar").

Robert Taylor stars as Johnny Eager, a hard-nosed gangster leading a double life. To fulfill his parole, he works as a cabbie and pretends to occupy a small hovel with his relatives but secretly continues to be an underworld gambling kingpin. Sweater Girl Lana Turner is Lisbeth, a naive socialite. Lisbeth meets Johnny in her efforts to study life on the other side of the tracks for a sociology class and falls hard for him. She believes he is a reformed man, but even after she learns of his criminal activities, Lisbeth remains loyal. Oblivious to his own feelings, Johnny uses her as a pawn to gain control over her father, the prosecutor who landed him in the clinker in the first place. Johnny loves Lisbeth, but if he can't figure out how much quick, he'll lose more than just their romance. Directed by Mervyn LeRoy, JOHNNY EAGER is one of the best gangster flicks of the 1940s, combining stellar performances with a gut-wrenching plot.

Johnny, a cagey racketeer looking to tighten his grip on local gambling operations, gets involved with a vulnerable society girl who becomes a pawn in his schemes.