DuckTales DuckTales the Movie: Treasure of the Lost Lamp G 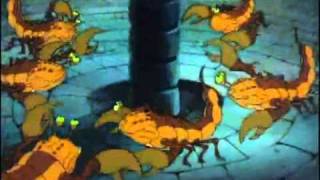 Scrooge Mc Duck, Huey, Dewey, Louie and Webbigail Vanderquack are in search of the legendary treasure of Collie bBba's ancient pyramid. The ducks make off with the loot which includes a magic lamp complete with wish-granting genie! But Merlock the evil sorcerer is in hot pursuit ready to do battle to gain possession of the lamp.

An animated adventure film featuring Scrooge McDuck and his nephews Huey, Dewey and Louie. The adventure begins when McDuck finds a magic lamp which holds a genie inside. But then the villainous Merlock, steals the magic lamp from McDuck and uses it for his own greedy purposes. With the genie's help, McDuck, his nephews and a new friend named Webby, start off on an adventure to try to recover the lamp and fulfill the genie's wish of becoming a real boy.

22%off
The Great Mouse Detective
$11.70 Super Savings
Add to Cart