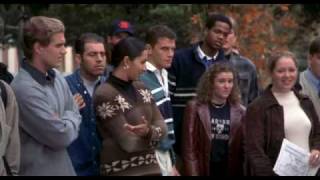 In the sharply funny LEGALLY BLONDE, Reese Witherspoon gives a glittering performance as Elle Woods, the natural blonde sorority queen who enrolls at Harvard Law School. When she first appears, Elle seems to be no more than the bright cousin of CLUELESS's Alicia Silverstone. Expecting her boyfriend Warner Huntington III (Matthew Davis) to propose, she is mortified when instead he says he needs somebody serious as his wife. When Elle discovers Warner's brother is engaged to a law student, she decides to go to Harvard. She studies for the LSATs, submits a video essay--in which she appears in a sequined bikini--and, miraculously, is accepted. At first, Elle is rebuked by Professor Stromwell (Holland Taylor) and is the target of snide comments from other students. But, gradually, it becomes clear that Elle is no fish out of water--she is smarter, more driven, and more likely to survive in the rarefied Harvard atmosphere than anyone else.

Witherspoon gets fine support from Selma Blair as Warner's new fiancée, Jennifer Coolidge as a beautician, Victor Garber as an unscrupulous professor, Ali Larter as a client from Elle's sorority, Holland Taylor, and Luke Wilson as a lawyer fascinated by Elle's unconventional approach. The smart, witty script is by Karen McCullah and Kirsten Smith. The first-time director is 28-year-old Australian Robert Luketic.

She's a California sorority girl who'll do anything to keep her man. Even if it means going all the way to law school! Reese Witherspoon (Election) stars with Luke Wilson (Charlie's Angels), Selma Blair (Cruel Intentions), Matthew Davis (Pearl Harbor) and Victor Garber (Titanic) in a knock-out comedy with a heart of gold and hair to match! Elle Woods (Witherspoon) is a California blonde with couture clothes, fabulous friends and the hottest boyfriend on campus. So when Warner Huntington III (Davis) suddenly dumps her and heads for Harvard Law School, Elle takes matters into her own perfectly manicured hands. She enrolls too! Now getting Warner back should be a snap, right' Wrong! Elle's about to begin the toughest fight of her life for love, honor, justice and respect for blondes everywhere!

Snow White and the Seven Dwarfs (DVD)
$28
Add to Cart