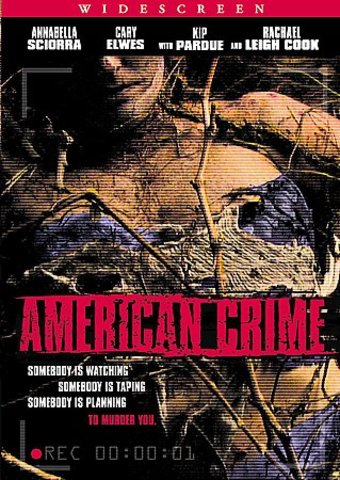 A series of gruesome murders has brought terror to a small, sleepy town, and they are made all the more horrible by the method by which they are documented. The killer stalks his victims with a video camera, surveilling their every move before he strikes; he then sends a tape of the killing to his next victim. Jessie St. Clair (Racheal Leigh Cook, GET CARTER) is a green young reporter who sees her shot at a big break and goes for it, launching an investigation into the murder of a topless dancer; she is assisted by her cameraman Rob (Kip Pardue, THE HEART IS DECEITFUL ABOVE ALL THINGS) and her producer Jane Berger (Annabella Sciorra, JUNGLE FEVER). But before Jessie gets any closer to the truth, she receives a videotape in the mail, and she knows she's next on the killer's list. As tensions mount and the murderer closes in, the whole crew begins to suspect one another; the arrival of solitary reporter Albert Bodine (Cary Elwes, THE PRINCESS BRIDE), sent by the nationally syndicated show AMERICAN CRIME, only serves to heighten their misgivings. This stylish, suspenseful thriller boasts the excellent digital cinematography of director Dan Mintz, and is sure to keep audiences guessing right up to the end.