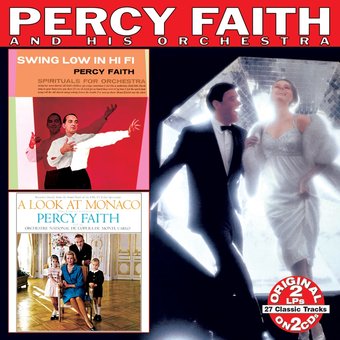 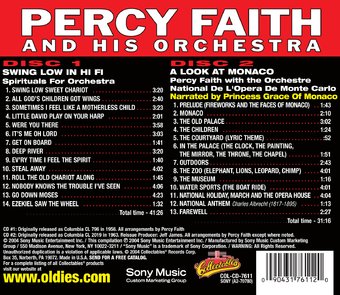 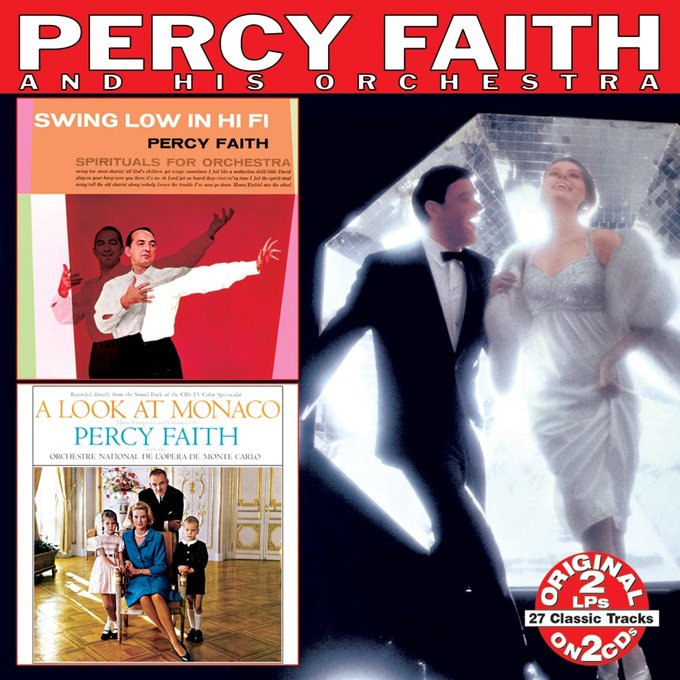 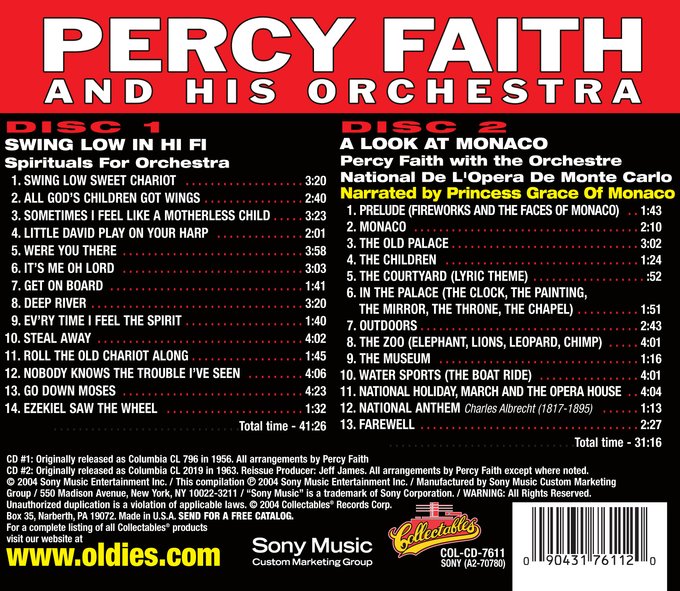 "Swing Low" is a classic album of Negro spirituals for orchestra - and Percy captures the emotions perfectly through the voice of the orchestra. Divorced from their usual words, Percy leaves no doubt they are giants of American musical heritage uniquely heard instrumentally, with the majestic sound of the full Faith orchestra.

"A Look At Monaco," a 1962 CBS television special, proves that Percy could write for buildings, elephants, children and more - his imagination was vivid throughout. This really is a soundtrack complete with narration from Princess Grace, with Percy's arrangements played by the Orchestra National De L'Opera De Monte Christo. Great fun to listen to the imagination captured through Percy's original soundtrack. The pure creative side of Percy's writing is perhaps never showcased better than it is here. (Bill Halvorsen)

2 LPs on 2 CDs: SWING LOW IN HI FI (1956)/A LOOK AT MONACO (1963).
A LOOK AT MONACO includes narration by Princess Grace.
Composer: Percy Faith.
Liner Note Author: Charles Burr.
Arranger: Percy Faith.
The Swing Low in Hi Fi/A Look at Monaco two-fer from Collectables features a pair of out of print LPs by Percy Faith, both originally issued on Columbia in 1956 and 1963, respectively. Highlights include orchestral versions of traditional spirituals, including "Swing Low, Sweet Chariot," "Deep River," and "Go Down Moses," followed by an audio documentary on Monaco featuring narration by Princess Grace and, with the exception of "National Anthem," original music composed by Percy Faith and performed with Orchestre National de l'Opera de Monte Carlo. ~ Al Campbell

60%off
Percy Faith
Plays Music From Broadway Production of House of Flowers /... (CD)
$5.98 on Sale
Add to Cart

Customer Rating:
Based on 4 ratings.


Swing Low In Hi Fi features a mixture of bright and lush songs by Faith.Some of these are lush and some are brass but of the lush ones they are really pretty what I like to call beautiful christian music.This is just instrumental without the chrous.

A Look At Monaco from 1963 is a mono album but it features Faith conducting or arranging the Orchestre National De L Opera De Monte Carlo Orchestra and has some beautiful music in it.There is some narrative at times by Princes Grace.This to me is prehaps one of the most unusual albums Mastro Faith did but it is a collector's item for all Faith fans myself included.