A bookworm gets promoted to commanding officer in this WWII comedy from Hal Roach. Bonus: Six 'Private Snafu' cartoons. 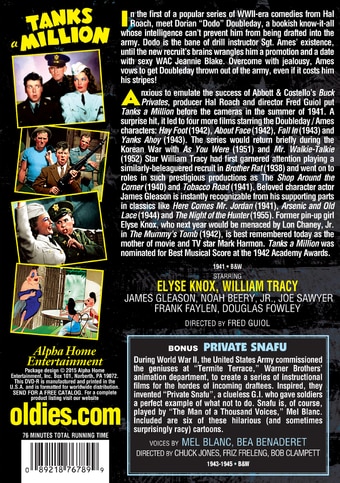 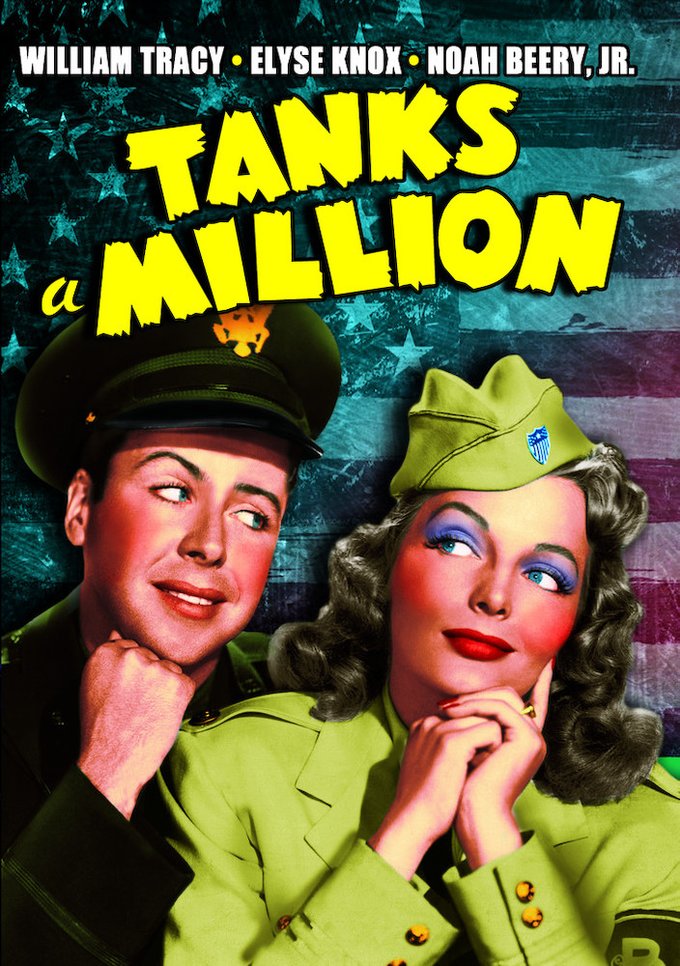 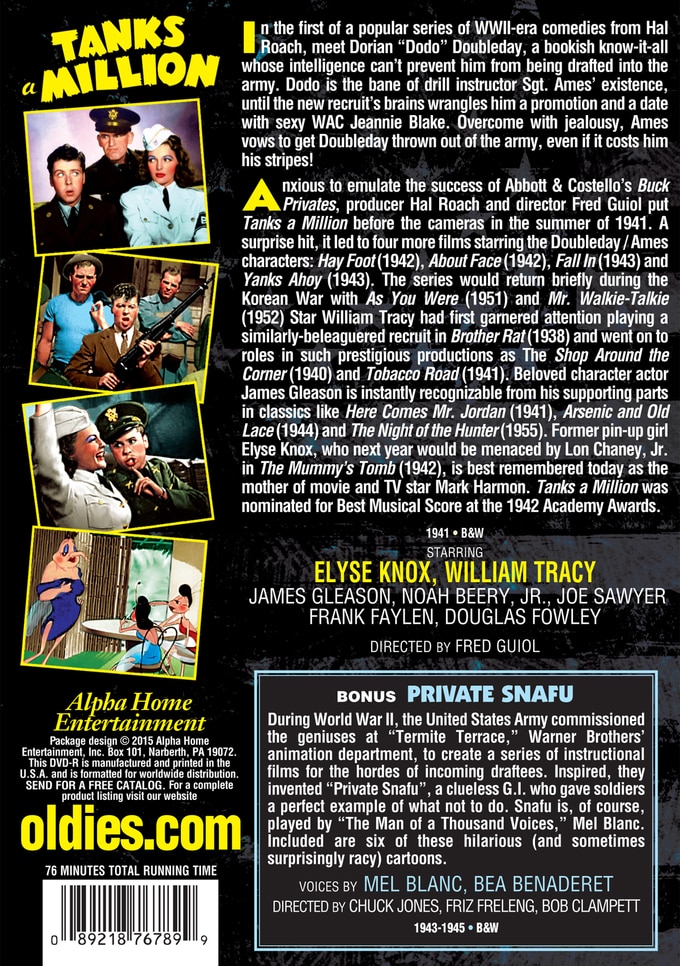 In the first of a popular series of WWII-era comedies from Hal Roach, meet Dorian "Dodo" Doubleday, a bookish know-it-all whose intelligence can't prevent him from being drafted into the army. Dodo is the bane of drill instructor Sgt. Ames' existence, until the new recruit's brains wrangles him a promotion and a date with sexy WAC Jeannie Blake. Overcome with jealousy, Ames vows to get Doubleday thrown out of the army, even if it costs him his stripes!

Anxious to emulate the success of Abbott & Costello's Buck Privates, producer Hal Roach and director Fred Guiol put Tanks a Million before the cameras in the summer of 1941. A surprise hit, it led to four more films starring the Doubleday/Ames characters: Hay Foot (1942), About Face (1942), Fall In (1943) and Yanks Ahoy (1943). The series would return briefly during the Korean War with As You Were (1951) and Mr. Walkie-Talkie (1952) Star William Tracy had first garnered attention playing a similarly-beleaguered recruit in Brother Rat (1938) and went on to roles in such prestigious productions as The Shop Around the Corner (1940) and Tobacco Road (1941). Beloved character actor James Gleason is instantly recognizable from his supporting parts in classics like Here Comes Mr. Jordan (1941), Arsenic and Old Lace (1944) and The Night of the Hunter (1955). Former pin-up girl Elyse Knox, who next year would be menaced by Lon Chaney, Jr. in The Mummy's Tomb (1942), is best remembered today as the mother of movie and TV star Mark Harmon. Tanks a Million was nominated for Best Musical Score at the 1942 Academy Awards.

BONUS: Private Snafu (1943-1945): During World War II, the United States Army commissioned the geniuses at "Termite Terrace", Warner Brothers' animation department, to create a series of instructional films for the hordes of incoming draftees. Inspired, they invented "Private Snafu", a clueless G.I. who gave soldiers a perfect example of what not to do. Snafu is, of course, played by "The Man of a Thousand Voices", Mel Blanc. Including are six of these hilarious (and sometimes surprisingly racy) cartoons.

Romance | World War II | Mishaps
This product is made-on-demand by the manufacturer using DVD-R recordable media. Almost all DVD players can play DVD-Rs (except for some older models made before 2000) - please consult your owner's manual for formats compatible with your player. These DVD-Rs may not play on all computers or DVD player/recorders. To address this, the manufacturer recommends viewing this product on a DVD player that does not have recording capability.