When it comes to saving the world, it helps to be a little chicken. 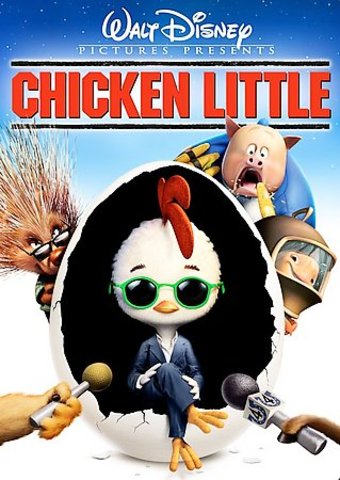 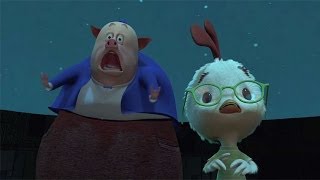 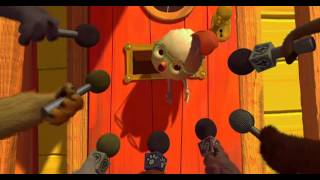 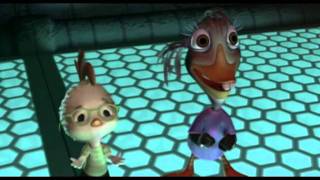 Disney's first venture into the realm of CGI animation (without Pixar) tells the tale of all-animal town Oakey Oaks's most infamous resident, Chicken Little (voiced by Zach Braff), who causes town-wide panic when he claims the sky is falling. A year later he's still shunned by everyone, including his dad (Gary Marshall), a single rooster with an incredibly wide tie. Determined to end his losing streak, the bespectacled Little joins the baseball team, even though he can barely lift the bat. Luckily his three equally outcast friends have faith in him: a pig with a yen for '70s disco (Steve Zahn); a Harpo Marx-esque goldfish in a diving helmet; and Abby, a buck-toothed female duckling (Joan Cusak). According to her sources in magazines such as Modern Mallard, Abby is sure Chicken Little merely needs "closure" with dad over the sky incident. But when the sky really does start falling due to a full-on alien invasion, and only Chicken Little knows why, dad still doesn't want to believe him.

Kids are sure to understand Chick's frustration in this matter, and parents will dig the sly riffs on films like VERTIGO (1958), THE BLOB (1959), INDEPENDENCE DAY (1996), and WAR OF THE WORLDS (1953), as well as Disney's own back catalog. In place of the usual musical numbers, CHICKEN LITTLE includes montages set to Barenaked Ladies songs and reinterpreted pop favorites (the old Art Garfunkel gut-wrencher, "All I Know," is a standout), while celebrity voiceovers come from Harry Shearer, Wallace Shawn, Patrick Stewart, Adam West, and Don Knotts, with Amy Sedaris as the obnoxious "Foxy Loxy."

Chicken Little
Experience a fantastic world of breathtaking action and adventure in Disney's hilarious new movie CHICKEN LITTLE. It's "a perfect family film," raves Scott Mantz of Access Hollywood. When the sky really is falling and sanity has flown the coop, who will rise to save the day' Together with his hysterical band of misfit friends, Chicken Little must hatch a plan to save the planet from alien invasion and prove that the world's biggest hero is a little chicken. Bursting with laughs, music, and out-of-this-world bonus features, including alternate openings, a trivia game, and much more, this sensational DVD is truly something to cluck about.

Home on the Range
$5.80 Super Savings
Add to Cart

Cloudy with a Chance of Meatballs 3D (Blu-ray)
$8.70 Super Savings
Add to Cart

Cloudy with a Chance of Meatballs
$7.20 Super Savings
Add to Cart