1.1M ratings
Currently Out of Stock: We'll get more as soon as possible
Notify Me When Available
Add to Wishlist
Format:  DVD
sku:  35ADK
92% recommend us! 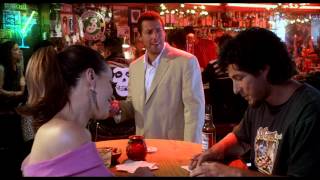 Directed by Frank Coraci (THE WEDDING SINGER, THE WATERBOY), CLICK is about more than how much fun it would be to fast-forward through all of the boring and unpleasant parts of life. Instead, it reinforces the importance of making time for the most important things in life, with family at the top of the list. Overworked Michael Newman (Adam Sandler) just can't catch a break. His boss (David Hasselhoff) doesn't want to hear that he has family commitments, and his family is upset that he never has time for them. Michael might be doing the right thing in order to get ahead, but his wife, Donna (Kate Beckinsale), and children feel neglected. His breaking point: the multitude of remote controls in the house are driving him nuts, and Michael ventures out late one evening in search of a universal remote control to simplify his life.

His quest leads him to the back room at Bed, Bath & Beyond and Morty (Christopher Walken), the archetypical mad scientist with wild hair, a bowtie, and zany glasses. Michael returns home armed with a top-of-the-line universal remote, but soon realizes that it does more than control the household appliances: the new remote actually works on time and people. With a click, Michael finds himself fast-forwarding through fights with his wife, muting her irritating best friend, and changing the volume of his dog's bark. He's even able to return to scenes from his past complete with commentary. But when his life begins fast-forwarding out of control, Michael begins to understand the importance of spending time with the people you love, being invested in your life, and living every day to the fullest. Sandler is likable as Michael, and Walker is simultaneously dorky and creepy as Morty.

67%off
Hector and the Search for Happiness (DVD)
$4.89 Spring Sale
Add to Cart