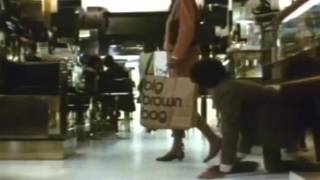 Vladimir Ivanoff (Robin Williams) is a Russian saxophone player for the Moscow circus. Life in Russia is difficult and unrewarding, but he silently accepts the corruption of the Communist party and the constant threat of KGB spies because he enjoys his job, has a steady girlfriend, and loves his family. However, his friend Anatoly (Elya Baskin) dreams of freedom in America and makes plans to defect when the circus announces an American tour to New York. Their trip to the Big Apple is thrilling, full of exciting revelations, and on their last day in New York they are allowed 30 minutes to shop in Bloomingdale's, surrounded by tempting American merchandise. While Anatoly loses his nerve, Vladimir is awakened with the desire to defect and manages to outrun the KGB. Suddenly Vladimir is a free man with no family or friends and no chance of ever returning to his homeland. With the help of a Bloomingdale's security guard (Cleavant Derricks) and a pretty Italian makeup counter saleswoman (Maria Conchita Alonso), Vladimir finds a place to stay and a wide variety of odd jobs to start out his new life in the United States. As Vladimir struggles to make it in America, he longs for his family and his homeland, wrestling with the magnitude of his choice. Williams gives an honest and heartfelt performance in this touching and witty comedy by Paul Mazursky.

Robin Williams will make you laugh and cry as a freedom-loving Soviet defector in this brilliant, thought-provoking romantic comedy. Circus saxophonist Vladimir Ivanoff (Williams) suddenly defects from his touring troupe in that temple of Western decadence - Bloomingdale's. Fleeing the K.G.B., Vladimir wins asylum and moves into the crowded Harlem flat of black security guard Lionel Witherspoon (Cleavant Derricks). Soon he has found both a voluptuous Italian lover Lucia Lombardo (Maria ConchitaAlonso), and a shrewd Cuban lawyer Orlando Ramirez (Alejandro Rey). Though Vladimir learns that life in America can be cold and even painful, he grows to love this strange and wondrous new land. Director Paul Mazursky has truly transformed Vladimir's declaration of independence into a very memorable film.

MOSCOW ON THE HUDSON is a warm and funny story about a Russian defector who sees both the good and bad aspects of his new home in New York City, finding that things are very different from what he expected.