A mysterious white stallion is the key to finding the location of a gang of cattle rustlers./A rookie Mountie suspects that his girlfriend's brother killed his commanding officer. 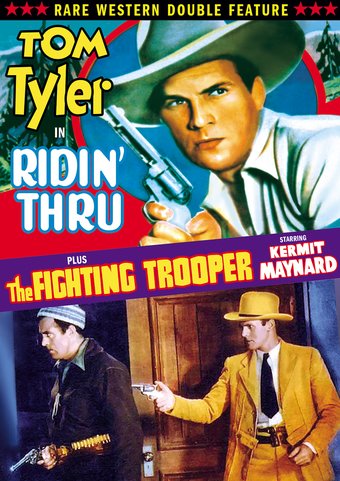 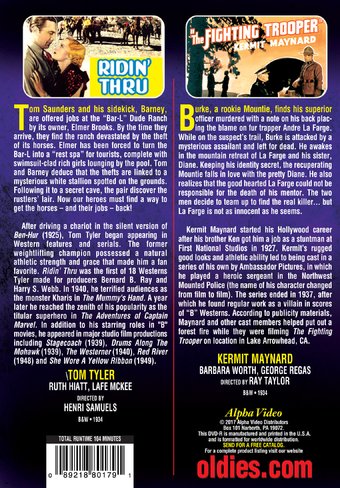 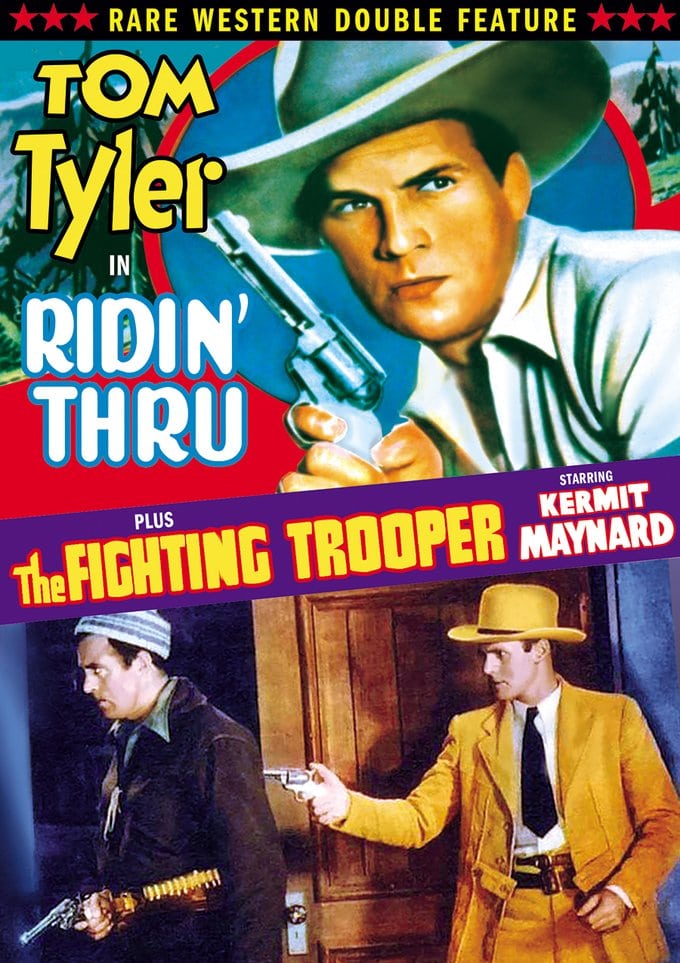 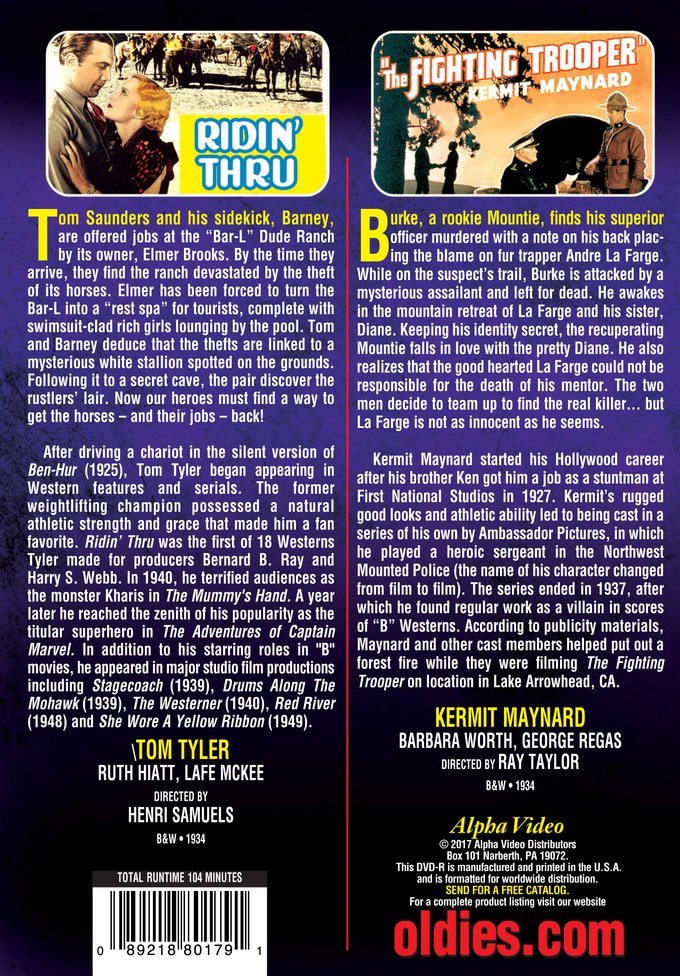 RIDIN’ THRU (1934): Tom Saunders and his sidekick, Barney, are offered jobs at the “Bar-L” Dude Ranch by its owner, Elmer Brooks. By the time they arrive, they find the ranch devastated by the theft of its horses. Elmer has been forced to turn the Bar-L into a “rest spa” for tourists, complete with swimsuit-clad rich girls lounging by the pool. Tom and Barney deduce that the thefts are linked to a mysterious white stallion spotted on the grounds. Following it to a secret cave, the pair discover the rustlers’ lair. Now our heroes must find a way to get the horses – and their jobs – back!

After driving a chariot in the silent version of Ben-Hur (1925), Tom Tyler began appearing in Western features and serials. The former weightlifting champion possessed a natural athletic strength and grace that made him a fan favorite. Ridin’ Thru was the first of 18 Westerns Tyler made for producers Bernard B. Ray and Harry S. Webb. In 1940, he terrified audiences as the monster Kharis in The Mummy's Hand. A year later he reached the zenith of his popularity as the titular superhero in The Adventures of Captain Marvel. In addition to his starring roles in "B" movies, he appeared in major studio film productions including Stagecoach (1939), Drums Along The Mohawk (1939), The Westerner (1940), Red River (1948) and She Wore A Yellow Ribbon (1949).

THE FIGHTING TROOPER (1934): Burke, a rookie Mountie, finds his superior officer murdered with a note on his back placing the blame on fur trapper Andre La Farge. While on the suspect’s trail, Burke is attacked by a mysterious assailant and left for dead. He awakes in the mountain retreat of La Farge and his sister, Diane. Keeping his identity secret, the recuperating Mountie falls in love with the pretty Diane. He also realizes that the good-hearted La Farge could not be responsible for the death of his mentor. The two men decide to team up to find the real killer...but La Farge is not as innocent as he seems…

Kermit Maynard started his Hollywood career after his brother Ken got him a job as a stuntman at First National Studios in 1927. Kermit’s rugged good looks and athletic ability led to being cast in a series of his own by Ambassador Pictures, in which he played a heroic sergeant in the Northwest Mounted Police (the name of his character changed from film to film). The series ended in 1937, after which he found regular work as a villain in scores of “B” Westerns. According to publicity materials, Maynard and other cast members helped put out a forest fire while they were filming The Fighting Trooper on location in Lake Arrowhead, CA.

Cowboys
This product is made-on-demand by the manufacturer using DVD-R recordable media. Almost all DVD players can play DVD-Rs (except for some older models made before 2000) - please consult your owner's manual for formats compatible with your player. These DVD-Rs may not play on all computers or DVD player/recorders. To address this, the manufacturer recommends viewing this product on a DVD player that does not have recording capability.

Customer Rating:
Based on 2 ratings.