The Gentleman from Louisiana

A young farmhand from Louisiana becomes a jockey and revolutionizes the world of horse racing in this very rare Republic feature, for the first time on DVD. Plus the short ‘Managed Money’ with Frank Coghlan Jr. and Shirley Temple. 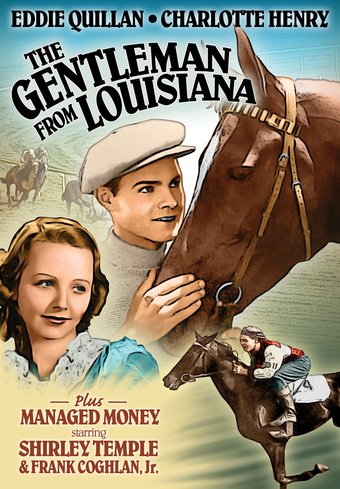 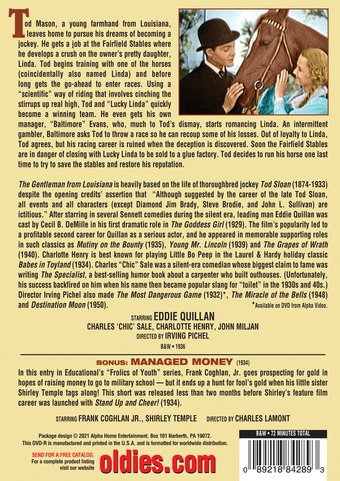 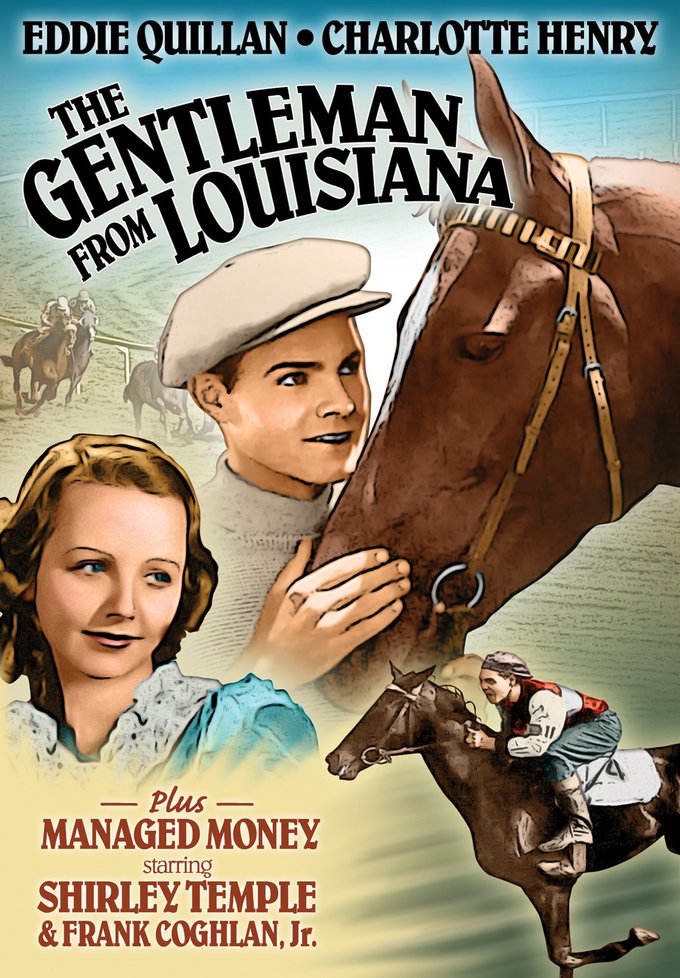 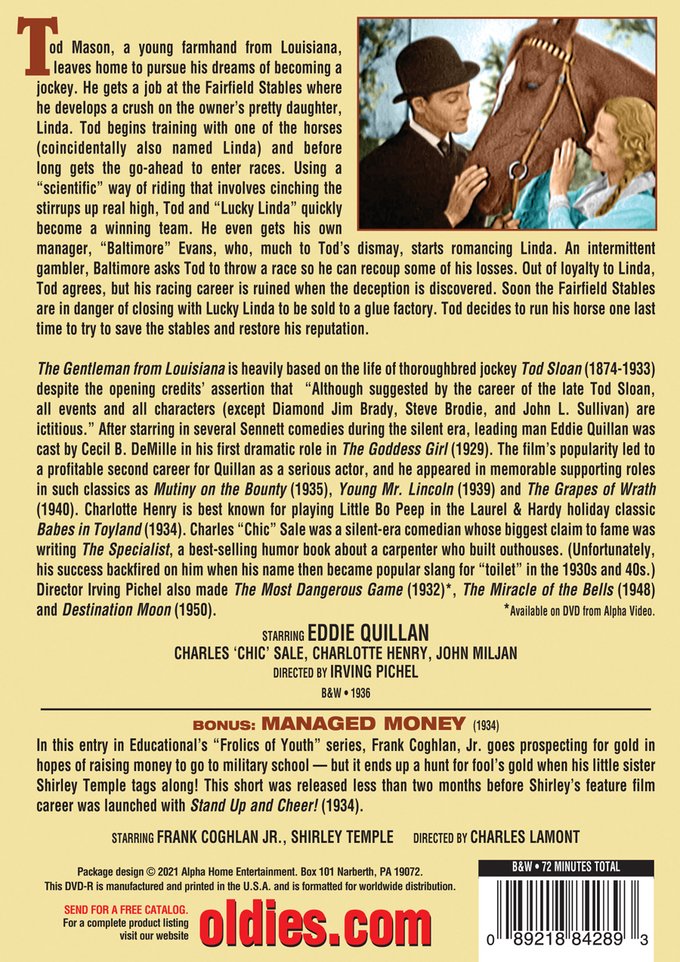 Tod Mason, a young farmhand from Louisiana, leaves home to pursue his dreams of becoming a jockey. He gets a job at the Fairfield Stables where he develops a crush on the owner's pretty daughter, Linda. Tod begins training with one of the horses (coincidentally also named Linda) and before long gets the go-ahead to enter races. Using a "scientific" way of riding that involves cinching the stirrups up real high, Tod and "Lucky Linda" quickly become a winning team. He even gets his own manager, "Baltimore" Evans, who, much to Tod's dismay, starts romancing Linda. An intermittent gambler, Baltimore asks Tod to throw a race so he can recoup some of his losses. Out of loyalty to Linda, Tod agrees, but his racing career is ruined when the deception is discovered. Soon the Fairfield Stables are in danger of closing with Lucky Linda to be sold to a glue factory. Tod decides to run his horse one last time to try to save the stables and restore his reputation.

An enjoyable horse racing picture from Republic, The Gentleman from Louisiana is heavily based on the life of thoroughbred jockey Tod Sloan (1874-1933) despite the opening credits' assertion that "Although suggested by the career of the late Tod Sloan, all events and all characters (except Diamond Jim Brady, Steve Brodie, and John L. Sullivan) are fictitious." Sloan is famous for popularizing the forward seat style of riding, which revolutionized horse racing, but his career prematurely ended in 1901 amid rumors that he was betting on his own races. Leading man Eddie Quillan was discovered performing on the vaudeville stage by legendary slapstick director Mack Sennett. After starring in several Sennett comedies during the silent era, Cecil B. DeMille cast him in his first dramatic role in The Goddess Girl (1929). The film's popularity led to a profitable second career for Quillan as a serious actor, and he appeared in memorable supporting roles in such classics as Mutiny on the Bounty (1935), Young Mr. Lincoln (1939) and The Grapes of Wrath (1940). Charlotte Henry is best known for playing Little Bo Peep in the Laurel & Hardy holiday classic Babes in Toyland (1934). Charles "Chic" Sale was a silent-era comedian whose biggest claim to fame was writing The Specialist, a best-selling humor book about a carpenter who built outhouses. (Unfortunately, his success backfired on him when his name then became popular slang for 'toilet' in the 1930s and 40s.) Director Irving Pichel also made The Most Dangerous Game (1932), The Miracle of the Bells (1948) and Destination Moon (1950).

BONUS: Managed Money (1934): In this entertaining entry in Educational's 'Frolics of Youth' series, Frank Coghlan Jr. goes prospecting for gold in hopes of raising money to go to military school - but it ends up a hunt for fool's gold when his little sister Shirley Temple tags along! This short was released less than two months before Shirley's feature film career was launched with Stand Up and Cheer! (1934).

Harry Potter and the Sorcerer's Stone
$5
Add to Cart