A quiet little town not far from here. 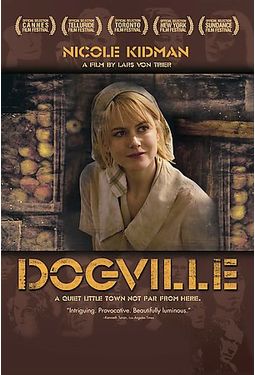 203K ratings
Currently Out of Stock: We'll get more as soon as possible
Notify Me When Available
Add to Wishlist
Format:  DVD
item number:  XRI 16234D
91% recommend us! 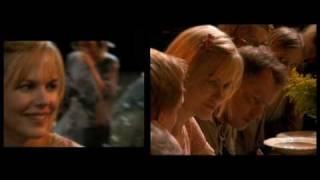 Set in the 1930s during the Great Depression in the Rocky Mountains, DOGVILLE is Lars von Trier's comment on Americana and his uniquely perverse view of small town life. With period costumes, a narrative that reads like a naughty OUR TOWN, and flashes of THE ADVENTURES OF TOM SAWYER--which is being read by one of the characters--von Trier sets the scene. Using nothing more than a black floor on which white chalk lines and labels mark out houses and landmarks such as the mine and the store, the film is essentially a play. With only minimal props, the emphasis is on the script and the performances.

Dogville is a tiny town consisting of just seven households and 15 adults total. Tom Edison (Paul Bettany) is the resident philosopher, who plans to write a book about morality but has not yet begun. He also serves as the town mayor, holding community meetings in the local church. When a beautiful woman, Grace (Nicole Kidman), arrives in town claiming she is being chased by thugs, Dogville welcomes her and agrees to harbor her--at cost. Grace must prove herself to Dogville's residents, first through physical labor, then through friendship, then through utterly astonishing sacrifices that, in classic von Trier style, go way beyond anything viewers might imagine. A bizarre and disturbing film, DOGVILLE features an all-star cast including Chloe Sevigny, Stellan Skarsgard, Ben Gazzara, James Caan, Harriet Andersson, Lauren Bacall, and narration by John Hurt.

Our Town (The Film Detective Restored Version)
$10
Add to Cart