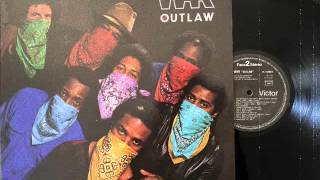 War - You Got The Power (Music Video) 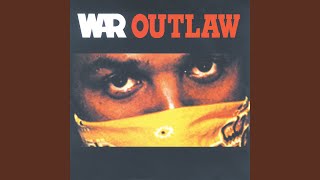 War: Howard Scott (guitar, vocals); Lee Oskar (harmonica); Pat Rizzo (saxophone, flute); Lonnie Jordan (organ, piano, synthesizer, percussion, vocals); Luther Rabb (bass, vocals); Harold Brown (drums, percussion, vocals); Ron Hammon (drums, percussion); Papa Dee Allen (percussion, vocals).
Additional personnel: Debbie Moman (vocals); W. Bergman, G. Smith, J. Coile, J. Berry, L. Thomburg (horns).
Includes liner notes by Barry Alfonso.
With the utterly dismal and critically hammered Music Band trilogy thankfully behind it, War ground to a halt in the wake of the death of former saxophonist Charles Miller. After a time out of the spotlight, and shrugging off the shadows, a rejuvenated War reappeared on RCA in 1982 sporting bright '80s-hued bandannas. Learning from (recent) past failings and leaving them behind, Outlaw saw the band taking tentative steps back toward its roots across a solid if at times slightly flat set. Both the punchy, funky opener, "You Got the Power," and the older-styled title track propelled the band back into the Top 20, while leaving plenty of room for the reggae-rhythmed "Just Because" and the outstanding "Baby, It's Cold Outside" to muscle in. But where War proved that it was back on track was across the muscular medley "The Jungle," which combined classic funk across bass and horns with politicized patter and surprisingly placed vocal harmonies. Outlaw, then, became a triumphant trumpet, a heralding battle cry -- War was returning to form. It was a strong comeback that not only brought the band back to its old fans, but also sowed the seeds for the themes and grooves that would be so prevalent on the following year's Life (Is So Strange) LP. ~ Amy Hanson

40%off
Mints - Before During and After Sex Mints
$2.38 Super Savings
Add to Cart

63%off
The World of Contemporary Jazz Groups
$2.98 CD Sale
Add to Cart