The story of the war at home, and the people who lived through it. 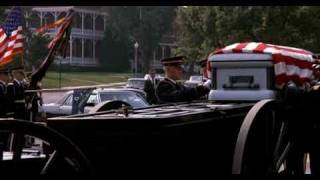 GARDENS OF STONE is Francis Ford Coppola's poetic tribute to the men who form the Old Guard, soldiers in charge of burying the dead at Arlington National Cemetery during the war in Vietnam. Clell Hazard (James Caan), an army sergeant who opposes the war because he believes it can't be won, becomes attached to a battle-hungry young soldier, Jackie Willow (D. B. Sweeney). Hazard knows the reality the youth will encounter if he goes to Vietnam, after serving two tours himself. His girlfriend, Washington reporter Samantha Davis (Anjelica Huston), also opposes the war, but for different reasons. Feeling useless in the Old Guard, Hazard requests a transfer to Fort Bragg, where he can help prepare the young soldiers for what they must face in Vietnam. Jackie is reunited with his girlfriend, Rachel (Mary Stuart Masterson), whose father, a retired colonel (played by Masterson's real-life father, Peter Masterson), sees the war as a commercial opportunity. James Earl Jones is a show-stealer as Goody Nelson, Hazard's best friend and voice of reason. The film's scenes of military burials--drills carried out with precision and ritual--are beautiful to watch.

James Caan plays Clell Hazard, a sergeant assigned to the Old Guard, soldiers in charge of burying the dead at Arlington National Cemetery in 1968. After serving in Vietnam, he believes the war is not winnable, so when young soldier Jackie Willow (D. B. Sweeney) wants to be sent there, Hazard and friend Goody Nelson (James Earl Jones) try to dissuade him. Hazard's girlfriend, Samantha (Anjelica Huston), is a liberal Washington reporter who also opposes the war. The military drills that make up the burial ceremonies serve as a bittersweet backdrop to the story.

Born on the Fourth of July (Special Ed.)
$8.70 Super Savings
Add to Cart