Surrounded by hostile Comanches, frontier widow Celia Gray knows the only hope she and her little boy have is to escape to Fort Dobbs. Their escort is Gar Davis, a strapping stranger who Celia fears is the man who murdered her husband. 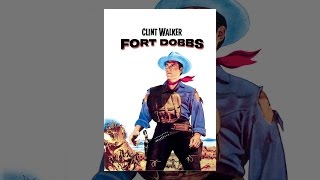 Surrounded by hostile Comanches, frontier widow Celia Gray knows the only hope she and her little boy have is to escape to Fort Dobbs. Their escort is Gar Davis, a strapping stranger who clearly has something to hide. Celia fears she knows his secret: he's the man who murdered her husband. Clint Walker plays the mysterious stranger and Virginia Mayo is the ravishing widow in this Western tale of high-desert suspense and action. As the desperate travelers make their way through Indian attacks and the perils of a forbidding terrain, they're joined by a gun trader (Brian Keith in a audience-grabbing performance) carrying high-performance rifles he's looking to sell - and Gar worries that the Comanches will be the highest bidder.

In this western, an accused killer is able to escape lynchers by trading coats with a dead man he found lying beside the road with an arrow in his back. He soon happens upon a farm. As the farm is under Comanche attack when he arrives, the man immediately saves the life of a woman and her son. He then takes the pair to Fort Dobbs. En route the woman realizes that the coat her hero is wearing belonged to her husband. Thinking the arrow hole in the back was caused by a bullet, the woman immediately accuses the hero of murdering her man. They arrive at the fort only to find it busily preparing for another Comanche raid. The clever hero devises an ingenious plan to defend them using the fifteen-shot repeating rifles brought by a gun trader. His ploy works. The Comanches are thwarted, his innocence is proven, and the young mother's good name is preserved.

Action | Death | Romance | Murder | Cowboys | Escape | Native Americans
This product is made-on-demand by the manufacturer using DVD-R recordable media. Almost all DVD players can play DVD-Rs (except for some older models made before 2000) - please consult your owner's manual for formats compatible with your player. These DVD-Rs may not play on all computers or DVD player/recorders. To address this, the manufacturer recommends viewing this product on a DVD player that does not have recording capability.