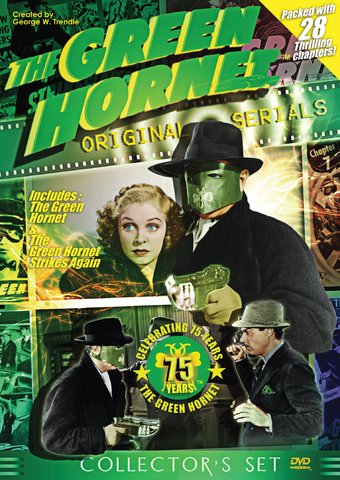 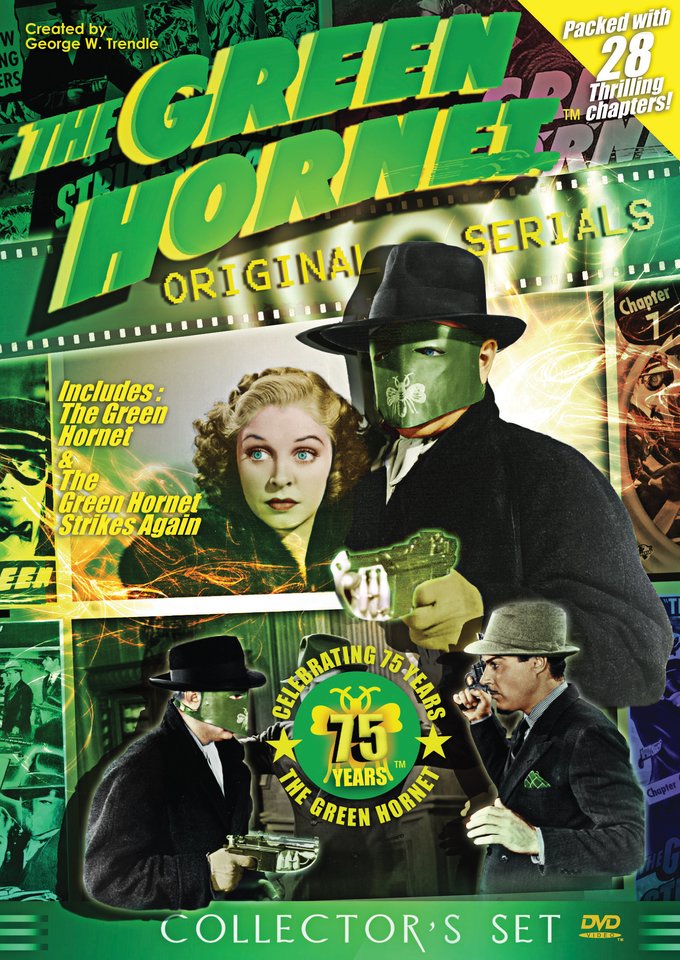 GREEN HORNET: The Green Hornet is a masked fictional crime fighter, originally created by George W. Trendle for an American radio program in the 1930s.The character has appeared in two Universal serials. In the first 13 episode serial, the city is faced with rising crime and increased racketeering activity. Intrepid newspaper editor, Britt Reid (Gordon Jones) becomes the crime fighter the Green Hornet to take on the bad guys. As far as the police are concerned, the Hornet himself is the criminal. This misunderstanding enables Reid to operate "outside the law" to battle evil and injustice. Working along side the Hornet is the brilliant inventor/sidekick Kato (Keye Luke), the only person who knows the true identity of the Hornet. Watch as our heroes fight an infamous racket and put an end to the menace infecting their city. RT: 258 min, B&W, 1.33:1, NR, 1940

GREEN HORNET STRIKES AGAIN!: A Universal movie serial based on the "The Green Hornet" radio series by George W. Trendle is the sequel to the 1940 serial The Green Hornet. With "A thousand ALL-NEW thrills!" this 15 episode serial featuring Britt Reid (Warren Hull) continues the crime fighting saga of the Hornet. While enjoying a vacation in Hawaii, Reid learns that a crime organization has extended its activities into almost every industry of the city. Disguised as the Green Hornet, Reid executes several attacks on the underworld establishment. Each foray brings him closer to the identity of the syndicate mastermind, an arch crook named Grogan. RT: 293 min, B&W, 1.33:1, NR, 1941

George W. Trendle's masked crime fighter The Green Hornet originated in a radio serial during the 1930s and swept up legions of fans in that venue, prior to his movie debut in 1940. Significantly, the first cinematic appearances of The Hornet didn't occur in a feature but in a couple of back-to-back movie serializations that seemed intended to transport the magic of the episodic radio format to the big screen. Both of those serials appear in this release: the 13-episode, four-hour GREEN HORNET (1940), and the 15-episode, 5-hour GREEN HORNET STRIKES AGAIN. The saga begins with the Hornet's alter ego, newspaper editor Britt Reid (Gordon Jones), donning his superhero guise to fight crime, and taking suave advantage of the authorities' perception of him as a lawbreaker, by working "outside of the law." He is joined, in his efforts, by the genius inventor and sidekick Kato (Keye Luke). GREEN HORNET STRIKES AGAIN finds Reid (now played by Warren Hull) on vacation in Hawaii, where he learns that a crime syndicate now overrules virtually every sector of the city - and then prepares do something about thwarting the central crime lord, a fellow called Grogan.

16%off
The Shadow Returns
$8.40 Super Savings
Add to Cart

25%off
Robinson Crusoe of Clipper Island
$5.95 on Sale
Add to Cart