Sex, murder, and adultery spice up these pictures from the most daring period in Hollywood history! 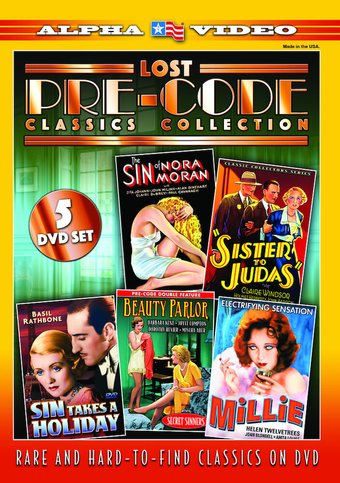 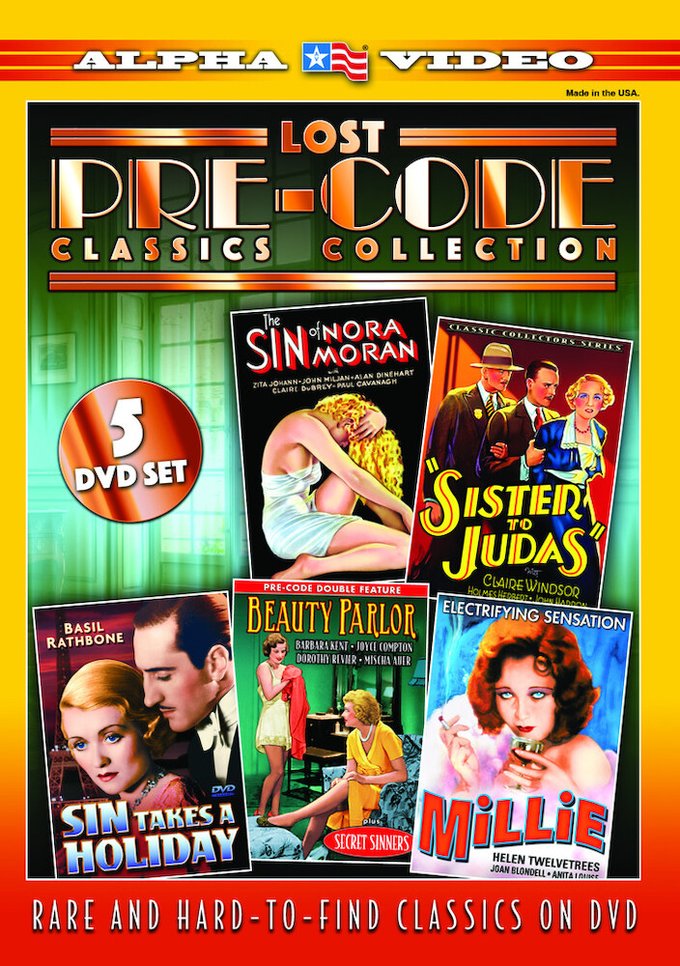 THE SIN OF NORA MORAN: Beautiful 21 year old Nora Moran waits on death row, hours away from her execution for a crime she did not commit. Sedated by sympathetic prison matrons, she dreamily recalls her tragic past. Orphaned at birth, she longs for a life in the theater, but as a teen is only able to find work in the circus as an assistant to Paulino, the lion tamer. Eventually, she runs away to escape brutal sexual abuse at the hands of her employer. Fleeing to another town, she finds love for the first time as the mistress of Governor Dick Crawford. Paulino finds her and as he attempts to rape her once more, he is murdered. She now willingly faces the electric chair, to protect the reputation of the real killer, the only man who ever gave her a brief taste of happiness.

SISTER TO JUDAS: A woman's attempts to rise above poverty lead to heartache and turmoil - and her own husband compares her to Biblical history's most infamous betrayer. Bright and ambitious Anne Fane sees her publishing company job as a means to escape her dismal slum existence. She has an opportunity to become her boss' assistant - but then the boss pays an unexpected visit to her home and gets an eyeful of her shady brothers Elmer and Percy. Certain that the boss now thinks less of her, a distraught Anne attempts to drown herself, but is saved by Ronnie, a young newsman turned novelist. Anne and Ronnie fall in love and marry, but the weak Ronnie is soon drawn into a life of crime by Elmer and Percy. Anne resolves to stand by Ronnie through thick and thin - not to mention tragedy and tear gas!

SIN TAKES A HOLIDAY: Enticed by his money and prestige, lovely and pure Sylvia Brenner (Constance Bennett) accepts the marriage proposal of her boss, decadent divorce lawyer Gaylord Stanton. The only reason he has proposed to his wallflower secretary is to avoid having to marry his mistress, who has been tightening the matrimonial noose. Stanton immediately whisks his new bride out of site, sending her off alone on a cruise to France. "Marriage" agrees with Sylvia who blossoms into an alluring woman of style and grace. This transformation does not go unnoticed by suave Reginald Durant (Basil Rathbone) who, finding the beautiful Sylvia unattended, begins to exert his considerable romantic charms. Reginald's fervent pursuit presses the passionate young bride's resistance to the breaking point.

BEAUTY PARLOR: Beauty Parlor is an uncompromising look at the lives of two beauticians, Sally (Barbara Kent) and Joan (Joyce Compton) as they struggle to survive in the big city. Unable to make rent with their meager salaries, both girls fall into becoming escorts for rich older men. A life of ill repute quickly leads to Joan taking the fall in an extortion scam. Sally is forced to marry one of her repulsive clients so she can bail out her friend, but selling her soul may be too steep a price to pay. Director Richard Thorpe had an over 40-year career in Hollywood, mostly spent at MGM. His filmography includes entries in the popular Tarzan and Thin Man series, the historical dramas Ivanhoe and The Prisoner of Zenda (both 1952), and the Elvis Presley vehicle Jailhouse Rock (1957). Starring Barbara Kent, Joyce Compton, Dorothy Revier and Mischa Auer.

SECRET SINNERS: ired from her position as a chambermaid, desperate Marjorie Dodd takes a job as a chorus girl at a burlesque show. She resigns herself to a life of being manhandled until she meets handsome millionaire playboy Jeff Gilbert. Seeing her salvation, Marjorie is devastated when she discovers that Jeff is secretly married. Her depression pushes her into the arms of a brutal gangster, leaving Jeff to choose between Marjorie and his passionless wife. The lovely Cecilia Parker is best remembered as Mickey Rooney's sister in the popular Andy Hardy series. Starring Jack Mulhall and Cecilia Parker.

MILLIE: Discovering that has been betrayed by her tycoon husband, Millie divorces him, but regrettably, must leave her daughter in the custody of the wealthy cheat. Determined to make her own way in the world, the much sought-after beauty remains cool and detached from any emotional involvement with men - until she opens her heart to a reporter. But her happiness is short-lived when she discovers that he too has been unfaithful. Years later, when an old suitor turns his attention to her stunning, now-teenage daughter, Millie's long-dead passion is reignited. But this time "it's not love she's after".
This product is made-on-demand by the manufacturer using DVD-R recordable media. Almost all DVD players can play DVD-Rs (except for some older models made before 2000) - please consult your owner's manual for formats compatible with your player. These DVD-Rs may not play on all computers or DVD player/recorders. To address this, the manufacturer recommends viewing this product on a DVD player that does not have recording capability.