Her Highness and the Bellboy
Warner Archive Collection (series)

Every princess needs a Prince Charming. But lovely Princess Veronica didn't expect hers to be bellhop Jimmy Dobson. Hedy Lamarr is the princess, Robert Walker is the bellhop and June Allyson is a bedridden former dancer who secretly loves Jimmy. 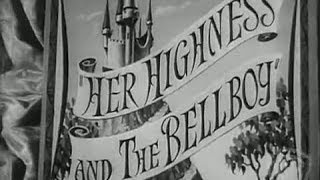 Her Highness and the Bellboy - Available Now on DVD (Trailer)

Every princess needs a Prince Charming. But lovely Princess Veronica didn't expect hers to be bellhop Jimmy Dobson. Hedy Lamarr is the princess, Robert Walker is the bellhop and June Allyson is a bedridden former dancer who secretly loves Jimmy in this frothy fairy tale set in prewar Manhattan's version of a palace: an elegant hotel complete with royal grounds (Central Park, of course). The fun begins when Jimmy mistakes Veronica for a new maid. She plays along, the two strike up a friendship and complications - romantic and political - ensue. The obvious screen chemistry between rising stars Walker and Allyson drew audiences again when they costarred later the same year in The Sailor Takes a Wife.

This tender but fluffy romantic comedy centers on the romantic travails of a beautiful European princesss who goes to New York to find the newspaper reporter she fell for when he was visiting her mythical country. She stays at the Big Apple's finest hotel and while there finds herself mistaken for a maid by a sweet-natured bellhop. Charmed by his confusion, she insists that he become her personal escort. She does not realize that the impressionable fellow has fallen in love with her and so misconstrues her every kindness. When not with her, the bellhop is visiting a beautiful invalid, who is secretly in love with him. Meanwhile the princess eventually finds the reporter. She makes him a proposition, but he, believing them to be too different, rejects the offer. Later, she takes the bellhop and goes to the reporter's favorite bar in hopes of seeing him. Unfortunately, the joint gets raided and she ends up in jail until the reporter shows up to bail her out. Soon afterward, she learns that her father has died and that she is now queen. Things get sticky then, as both the bellboy and the new queen find themselves faced with choosing between wealth and power or true love.

Romance | Reporters | Doomed Lovers | Big City | Royalty | Romantic Comedy | Love
This product is made-on-demand by the manufacturer using DVD-R recordable media. Almost all DVD players can play DVD-Rs (except for some older models made before 2000) - please consult your owner's manual for formats compatible with your player. These DVD-Rs may not play on all computers or DVD player/recorders. To address this, the manufacturer recommends viewing this product on a DVD player that does not have recording capability.

26%off
Forsaking All Others
$9.60 Spring Sale
Add to Cart

26%off
Romance in Manhattan
$9.60 Spring Sale
Add to Cart