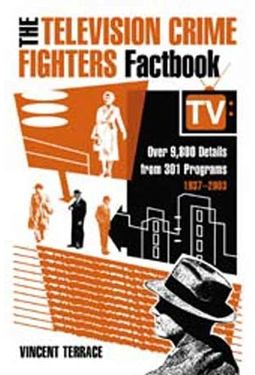 Did you know that detective Adrian Mont ("Monk") is afraid of milk? That Pinky's real first name on "The Roaring '20s" is Delaware? That on "Charlie's Angels," Sabrina was the only Angel who was never seen in a bikini or swimsuit?

These are only a few of the more than 9,800 facts readers will find in this work, which presents detailed information on 134 syndicated and cable series broadcast from 1948 to 2003, plus six experimental programs broadcast from 1937 to 1946 and 204 unsold pilots broadcast from 1948 to 1996, that featured the work of television's law enforcers who risk their lives to solve crimes and bring criminals to justice. The entries are arranged alphabetically and provide such details as character names, addresses, names of pets, telephone numbers, and license plate numbers - in short, anything and everything that adds interest to a program and its characters. Many of the entries contain information about related projects, including TV movies and pilots that were broadcast as part of a series (for example, Sharon Stone's appearance as detective Dani Starr on the 'Hollywood Starr' episode of "T.J. Hooker").

74%off
This Is Spinal Tap (Cultographies Series)
$3.88 on Sale
Add to Cart