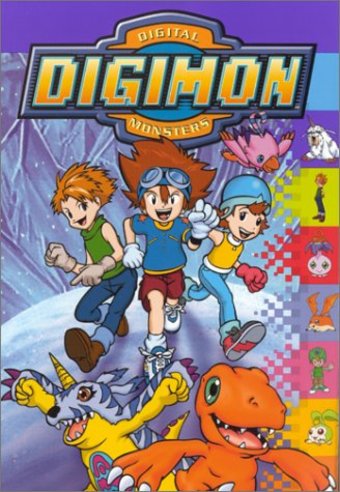 This third installment of Digimon finds the seven lost campers and their Digimon on an unfamiliar island. In "Ikkakumon's Harpoon Torpedo," Joe climbs Infinity Mountain to get a better look at the group's surroundings, and encounters flying black gears that turn normally friendly digital monsters into combative foes. Luckily, the group follows him, and Gomamon digivolves into Ikkakumon to save the day with his harpoon torpedo. In "Evil Shows His Face," the kids discover that they are "the digidestined": the ones chosen to preserve the existence of the digital world. An encounter with Devimon, the evil ruler of the underworld, and his subjugates Ogremon and Leomon, teaches the group the value of teamwork, and lends insight into the mystery of the flying black gears. Thanks to a little help from a digivice and a host of digivolved Digimon, the kids survive the attack, but find themselves scattered among several different islands.

In "Sub Zero Ice Punch," Tai and Agumon land on an icy island, where they encounter a gear-influenced Frigimon. Agumon dissolves the gear and Frigimon returns to his friendly self, helping the pair find Matt and Gabumon on a nearby island. Initially the two boys disagree about how to proceed: Matt wants to search for their missing friends and Tai argues that the key to everyone's survival is to first defeat Devimon. Only the next episode will tell if their agreed-upon path will be successful.

Digimon is incredibly similar to Pokémon: Both are good-looking animated series starring powerful children accompanied by monsters that evolve into more powerful creatures. Digimon differs from Pokémon in that it focuses more on the concept of teamwork as a powerful defense against a specific enemy rather than on one kid's quest to become a trainer of monsters. If you're looking for true adventure, a great story line, and dandy animation, Digimon is for you. (Ages 5 and older) --Tami Horiuchi