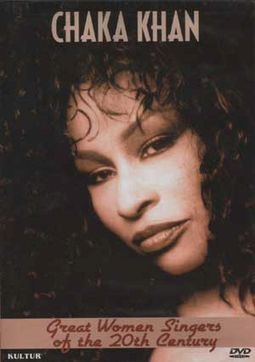 Chaka Khan has been singing for 35 years. The multi-platinum, Grammy Award winning singer began her career in the early 1970s with the pre-imminent funk group Rufus. A beautiful and dynamic vocalist, Chaka was raised on Chicago's South Side. She began her career as a solo artist interestingly, singing jazz. Her fame however, came with contemporary solo funk hits like "I Feel For You" and the classic "I'm Every Woman," which she successfully recorded 10 years before Whitney Houston's cover version.

This 1992 live performance at New York's famed jazz club The Blue Note, finds Chaka in the musical environment in which she has always felt most creative. In great voice and surrounded by five talented jazzmen, she performs a rare catalog of songs closely associated with jazz. Several of which cannot be found on her recordings. She sings the Ellington / Strayhorn "Take The 'A' Train," Rodgers and Hart's "My Funny Valentine," plus "Summertime" and "I Loves You Porgy" from Gershwin's folk opera Porgy and Bess.

The 1970s and '80s were lit up by the supreme vocal talents of soul diva Chaka Khan. An eclectic career has seen Khan covering a lot of musical ground, from the disco-inflected early '70s work with Rufus to hip-hop tinged '80s hits such as "I Feel For You" to a latter day career as a jazz vocalist. This concert from 1993 sees Khan taking to the stage at the Blue Note in New York, where she lets her vocal chords loose on a selection of jazz numbers, proving that she is truly one of the GREAT WOMEN SINGERS OF THE 20TH CENTURY.