An Officer and a Gentleman ("I Love the 80s" Edition, CD Included) R

Life gave him nothing, except the courage to win...and a woman to love. 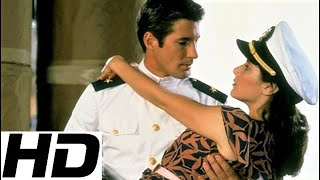 Zack Mayo (Richard Gere) has nothing--the son of an alcoholic, indifferent military father, he's grown up in the Philippines living on top of a brothel. But after college he decides he wants more and, despite his father's mockery, enrolls in the navy's Officer Candidate School to become a jet pilot. His sergeant, brilliantly played by Louis Gossett Jr., makes his life a living hell from day one, but Zack won't quit. The candidates are warned to stay away from the local girls looking for naval husbands, but Zack and his bunkmate, Sid (David Keith), find themselves falling for two friends, Paula (Debra Winger) and Lynette (Lisa Blount), who work at the local paper mill. Zack fights his feelings for Paula, determined to let nothing sway him from his goals. But as the hellish weeks of training go by, Zack begins to see that maybe he can't do it alone--and that what's getting him through are his friends in the ranks, and the girl he's been pushing away. Widely acclaimed at the time of its release, director Taylor Hackford's inspiring film is a romance for the ages.

In this popular romance, Richard Gere plays Zack Mayo, a self-serving, cynical loner desperately hoping to earn a naval commission to become a jet pilot. His single-minded focus on getting though Officer Candidate School is unexpectedly waylaid by his involvement with a local girl (Debra Winger) and his newfound friendships in the ranks, so Zack finds that achieving his dreams may not be a solo pursuit after all. Joe Cocker and Jennifer Warren sing the memorable Academy Award-winning theme song "Up Where We Belong."