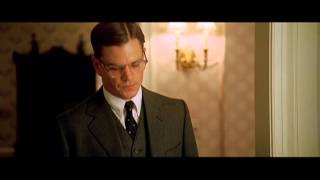 With THE GOOD SHEPHERD, Robert De Niro (A BRONX TALE) makes an ambitious return to the director's chair. A labor of love for Oscar-winning screenwriter Eric Roth (FORREST GUMP), the film tells an epic, fictionalized account of how the Central Intelligence Agency was born. Matt Damon plays Edward Wilson, a reserved young man who graduated from Yale in the late 1930s. His membership in the exclusive, hidden Skull and Bones society led him away from poetry and into a relationship with the federal government, who recruited him to help them on several covert operations. Roth's script alternates between Wilson's gradual emergence as a genuine government operative in the early 1940s and the infamous Bay of Pigs conflict in the early 1960s. Along the way, he has a sweet romance with a pretty deaf girl (a sparkling Tammy Blanchard) and ends up marrying the woman he impregnates (Angelina Jolie) out of a strong sense of duty. Throughout the film, the emergence of a mysterious tape haunts Wilson, who is determined to uncover the truth behind a leak in his secret organization.