Get ready to jam. 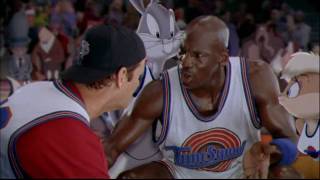 Threatened with being kidnapped and taken to Moron Mountain by the Nerdlucks, Bugs Bunny and the Looney Tunes characters propose a winner-take-all basketball game. Confident that their ringer, NBA mega-star Michael Jordan, will ensure their victory, Bugs & Co. are surprised with their foes' ability to "absorb" talent from other earth-bound hoops stars. A live-action/animated comic adventure.

"Space Jam" marks the film debut of basketball legend Michael Jordan, who plays himself opposite some rather "colorful" co-stars...
When the Looney Tunes bunch are kidnapped to another planet by the dastardly Swackhammer, Bugs Bunny challenges them to a basketball game to win their freedom. But when the hulking opposing team, the Monstars, sap the talent from such popular hoopsters as Patrick Ewing and Charles Barkley, the Looney Tuners realize they're in deep trouble. In response, they enlist the aid of Michael Jordan, who trains and later joins the squad.
It's gonna be a wild 'n wacky, high flyin', slam-dunk of a game -- with everything at stake for Bugs and company. Can "Air" Jordan lead them to a victory'

The Blind Side
$6 Super Savings
Add to Cart