Sooner or later, a man who wears two faces forgets which one is real 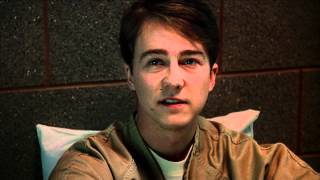 "When your mother says she loves you, ask for a second opinion."
- Martin Vail (RICHARD GERE), to a reporter who is interviewing him.

Powerful, media-hungry Chicago defense attorney Martin Vail (Richard Gere) gets in over his head when he takes the case of an altar boy (Edward Norton making his film debut) accused of murdering an archbishop. His opponent for the prosecution is his former protege and lover Janet Venable (Laura Linney), who's out to make this her watershed case. A suspenseful courtroom with a truly unexpected ending, this drama is based on the novel by William Diehl.

In Chicago, an Archbishop has been brutally murdered, and a sweet-faced altar boy named Aaron -- who was seen fleeing the scene of the crime and whose clothes were soaked in blood -- is charged with the crime. Aaron claims he was present when the murder occurred, but that he is not the killer.
Coming to Aaron's rescue in this high-profile case is Martin Vail, a cocky lawyer who loves the media's spotlight as much as he loves his job. The legal road ahead of Martin and Aaron is filled with many obstacles, including a very determined prosecuting attorney (who's Martin's ex-lover), revelations about the Archbishop's "relationship" with the altar boys, and Aaron himself, who has a very violent, repugnant second personality named Roy.
Is Aaron/Roy guilty' Or is he taking the fall for someone else'